The hallowed turf of Huish didn't get much restbite in the summer of 1929, a carnival was organised on the pitch, including a baby show, firework display, fancy dress - won by Red Riding Hood and a tug of war won by Bradford Abbass. The day topped off by a caveman football match. To cap it all off a motor cycling gymkhana was also held during the summer which guaranteed ' three hours of thrills and spills'.
The AGM, held in the changing rooms, revealed another working loss of £140, something that the committee were quite happy with as it was the smallest working loss for quite a few years, despite the disastrous previous season. Attendances had dropped to an all time low of an average of 1600 and when striker Campbell left and a few days later leading scorer Bob White go the Wolves, public criticism of the club was rife.
With Tommy Lowes disappointing one and only season in charge now over, it was time to start afresh. A new man was needed, a man with pedigree on the pitch at the highest level and more importantly with contacts, the club found a Pratt, David Pratt. 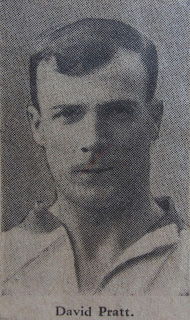 Thirty-six year old Scotsman, David Pratt had a fine if undistinguished pedigree behind him. Starting out his professional career with Celtic and then Liverpool and Bury. A defender by nature, he had come to the end of his career and saw Yeovil as a stepping stone into higher management, a man who was seriously ambitious and with contacts all over.
Pratt, went straight into action, most of the dead wood from the previous season were not offered contracts and Scotland and the North of England would become the club's hunting ground. Starting with an advert in the northern and Scottish press.

The season ended with two prestigious friendlies. First up, Second Division Tottenham Hotspur arrived with their full squad, including English international Jimmy Dimmock. Over 6000 turned out to see an exciting match with Spurs running out winners 6-4.
Another 5000 turned up at Huish two days later to watch Leicester City at Huish. Although the reality it being mostly a Leicester City reserve side. Again an exciting match saw Yeovil come back from 4-1 down at half time to fight back however eventually again losing 6-4.

With that the season was over. Dave Platt had jigsawed together one of Yeovil's finest ever teams. A team that played extensive one touch combined with speedy attackers. Could he keep the team together? Or would David Pratt's ambition see him away at the first chance. These were the questions in most of the Huish faithfuls mind during the summer. Whatever happened though, Pratt had given the club it's pride back.
Happy days!