It was the end of era, the great Fred 'Johnny' Hayward would not be turning out again in a Green and White shirt. Now forty years old, he had ended his last season at the club flitting between the first team and reserves. His last competitive game came in the reserves against Lovells Athletic, he signed off his career in typical Hayward style , he scored seven in a 12-1 win. With that he packed his boots away after twenty years service and went back home to his wife Mabel and nine children and by the Monday was back at work in the Glove factory.

The application for election to Division 3 South had not gone to plan, the club picking up just one vote! Torquay, the Southern League Western champions being voted in along side Watford. Aberdare losing their league status.

Player Manager Jack Gregory, who had missed alot of the previous season through injury was now in the final year of his contract. A manager who had brought the Southern League Western title to Huish in his first season, had since produced two disappointing mediocre seasons. Seasons in which the only silverware on display was the Dorset League championship trophy.

The medicrocy had resulted in falling atrendance equalling another £300 working loss to add to the ever growing debt. Questions were being asked about the financial outlay for such a little return reserve team football was having. Crowds for reserve matches down in the lower hundreds for most matches. At the 1927  AGM,  Chairman Ted Wrinch stepped down through ill health and the reigns of the club was handed over to William Stanley Johnson. Johnson, the son of a Glover manufacturer and former mayor, became one of the major benefactors for sports and entertainment in the town. Johnson Hall and Johnson Park, a fifteen acre site, were both purchased by him and gifted to the people of the town. Paying out a colossal £40,000 alone for Johnson Park.

Looking to ensure his last season in charge  was a successful one Gregory went on the hunt for players by placing an advertisement, as he did in the previous season in the Athletic publication. 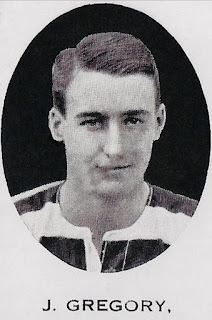 With the parting of ways with Jack Gregory the main topic of the cafes and pubs of Yeovil being "who's coming in to replace him?" they didn't have to look far for the answer.
Happy days.