With the new limited company in place, plans were made to push the club forward and raise revenue, they started  by turning the pitch into tennis courts in the summer and letting them out from May to August for £2 .

It is worth noting the incredible rise of the club at this point. Just ten years before they were a mediocre, though well supported team plying their trade in the Somerset and Dorset leagues, playing on a pitch which to enter was described like walking through a farm yard. Now, in ten years they were a limited company, in the Southern League playing in a stadium with a capacity of 10,000 also playing at stadiums that were some of the most notibke in the country. The rise hadn't gone unnoticed by other teams in the South West who looked on at envy and saw Yeovil and Petters as the example of what to achieve.

The new company decided on a professional player manager, Jack Gregory from Queens Park Rangers was enticed to Huish with the helpful persuasion of a friend of Gregory's who lived in the town.

Gregory, born in Birmingham was well respected in the football community at large. A proven striker who had previously played for West Bromwich Albion and had been QPR's leading goalscorer just two years before in Division three South. He didn't waste anytime, he signed his contract and immediately set out on a three week tour of the Midlands to hunt for players.
The signings came thick and fast Warren arrived from Coventry, he'd played mostly for their reserves and had scored against the Glovers previously. John Thompson, a tall, strong, no nonsense centre half was brought in from Harlesden Town. Watts came in also from QPR, a former team mate of Gregory's, again a strong, tough tackling full back. Harry Pidgeon a forward signed from Southend, although had previously been at QPR with Gregory. Pidgeon also bringing his brother to play for the amateur team in the Western League.
In additional, the club were searching and scouting the area for the amateurs, Russell came from Westham, a club near Weymouth, and Striker, Radford from Friernhey FC in Exeter. However, rumours started arising that legendary striker Fred Hayward was leaving, to add insult to injury the rumour was he was signing for Weymouth. Thankfully, Glovers's fans sighed with relief when he signed on at Huish.
Gregory's new side started the Southern League Western Division with a home fixture with Bristol City reserves, the reigning champions. A sizeable crowd of 3400 turned out to see the Glovers run out in a new kit of full green shirts and white shorts, moving away from their traditional green and white stripes. The match was lost 2-1, although those gathered could see a marked improvement on the performances of the previous season. Thompson at centre half and player manager Gregory being particularly singled out. They were right to be optimistic about the performance, it would be four months until Yeovil saw another in the league as they set on a run unprecedented so far in the club's history. The team for the opening match :
Vallis, Watts, May, Abbott, Thompson, Gregory, Gardner, Warren, Pidgeon, Hayward, Bruzas.
The two teams met again a week later at Ashton Gate, a match which was to give an indication for what was to come. A controlled, disciplined solid performance saw the Glovers brush aside the Champions 4-1. Bristol journalists putting the result down to poor defending and Yeovil not fully deserving the margin of victory. After a 3-2 friendly win against Charlton Athletic reserves, St James Park Exeter was next on the league fixture. In a match described as 'Brawn v Brains' the brains being Gregory's side. Another fine 3-1 victory with left back Watts scoring his fourth penalty in three league games. Again the Exeter press dismissing the defeat as not a true reflection of the match.
Frome, just a few seasons before had been the Glovers equal. Those days were gone as they headed to Huish for the preliminary round of the FA Cup as rank underdogs. Despite a spirited performance by Bryant in the Robin's goal, Yeovil, with again an unchanged team comfortably won 2-0, Harold Pidgeon scoring his first goals of the season. The Frome fans goading the home support with ' you can beat us at football but never at water polo'.
It wasn't often current International footballers graced the Southern League, however when Llanelly arrived at Huish, the Welsh men's ranks included Jack Marshall the current Scottish International left back. The debate of Hayward v Marshall being openly discussed during the week before the match no doubt. Despite having such a class player, Llanelly decided to play the one back game to start with, an early form of the offside trap. The tactics didn't go down well and caused the ire of the Huish faithful. It worked, at half time the score being 0-0. However, in the second half, Llanelly decided that attack was the best defence and only a fine display in goal by Jack Vallis kept them at bay. Yeovil eventually breaking and scoring twice through Hayward. To protect their lead the Glovers decided to follow their opponents earlier one, and turned to the one back system, much to the merriment of the faithful as it ended 2-0. All present though praising Jack Marshall's brilliant display at left back for Llanelly, he couldn't stop Hayward though! Marshall after the season emigrating to the USA and becoming one of the first promoters of 'soccer' in the country.
When the next round of the FA Cup was made, it gave the Glovers a trip to Wiltshire to play Westbury United of the Wiltshire league. Westbury, still only three years in existence saw pound signs and asked the match to be competed at Huish, Yeovil more than happy to oblige. The  little Westbury side, along with a small band of supporters received a hero's send off from Westbury Station to catch the 12.55 train to Yeovil. The Glovers were in no mood for sentiment though, by half time it was 8-0. Easing off in the second half, Hayward ended up with six to his name, and Warren getting a hat trick, with the final score of 12-1  still a record victory for Yeovil Town. One guess not many were waiting at Westbury station on their return. 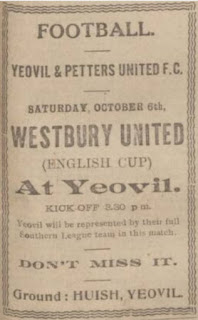 A trip to the Principality against Bridgend, saw Yeovil continue their fine league form coming from a goal down at half time to win 4-1. However, most fans were seeking revenge on Welton Rovers, who the Glovers had been drawn against in the next round of the FA Cup. Welton the previous season had defeated the Glovers at West Clewes by using a tactic of kicking the ball out of the small ground at every opportunity to waste as much time as possible when leading 2-1, even their fans joined in! A record crowd of 1800, half of them from Yeovil, at West Clewes saw 'The Shamrocks' as Yeovil were being referred to because of their all green shirts, go behind before half time. Rovers refraining on the previous season's tactics and using brute and agression. Yeovil were all at sixes and sevens as they gave away a penalty to make it two nil, Vallis thankfully saving. It was the sign for Yeovil to take control, within a few minutes Thompson had equalised and when Warren scored the winner for Yeovil, the Glovers's fans let off fireworks and commenced communal singing with instrumental backing.  Revenge had been taken!
A 1-0 win at home against Exeter City Reserves made it nine wins in a row for the Glovers. It lead them into the next round of the Cup a tough match at Huish with fellow Southern leaguers, Torquay United. A hard fought, end to end match on a blustery day saw the Glovers come from behind to draw 2-2. The reply being on the following Wednesday afternoon.  Again a tight game in front of 2300 at Plainmoor, saw United take an early lead only for Johhny Hayward to pull it back before half time. It wasn't to be though, with a penalty for a hotly disputed  handball, United earnt the right to play Aberdare in the next round. For Yeovil, the cliche of 'concentrating on the league' which they duly did. Again, the Glovers went on a run nine wins out of nine.
Despite the fine start, Yeovil still only found themselves in fifth place come Mid-November. Mainly through Cup matches that saw the Glovers having played only eight league games compared to the 12-15 of the teams above. Top of the league Plymouth Argyle Reserves were next with back to back games home and away. At Home Park, Yeovil had the support of the Yeovil schools team who had narrowly been beaten 1-0 by Plymouth boys in the morning. An own goal and one by Watts gave the Glovers a deserved 2-1. A week later at Huish, in one of the finist footballing matches seen on the ground, Yeovil defended strongly and attacked at speed resulting in the double over Argyle in a 3-1.
A mini Welsh tour taking in Ebbw Vale and Llanelly brought home maximum points without a goal conceded. After Bridgend were beaten just before Christmas it was the club's 12th league won in a row. They found themselves third in the league, one point behind the top, with seven games in hand, conceding just eight goals in the league so far. Eastville, Bristol would see if it would be thirteen. A fair few Yeovil fans, travelled on Christmas Day and swelled the gate to 4000. Rovers twice took the lead, however fast counter attacking football saw Pidgeon score to make it 3-2 and maximum points from thirteen matches. The next day, Rovers reserves travelled to Huish and became the first team to wrestle a point of the club since the opening day of the season in a 3-3 draw.
Yeovil's succes on and off the field was not going unnoticed with towns such as Taunton and Weymouth voicing the wish to go the 'Yeovil route' and become a limited company and the employment of an ambitious player-manager. Media in the South-West rightly pointing out that the most important part of the success was having a business brain and forward looking chairman such as Yeovil had in Ernest Farr. Johnny Hayward, now 36, had already scored twenty-two goals in the season, which made one Bristol correspondent articulating that he go to Bristol City. 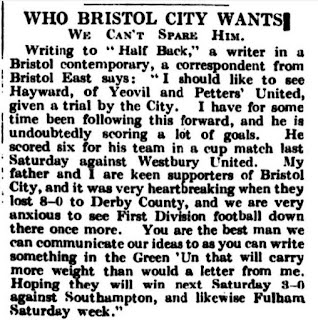