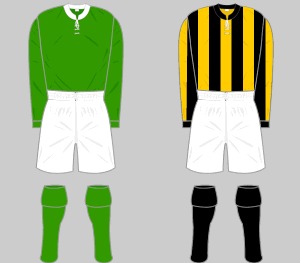 One can only use guess work of just when the idea of the Petters United and Yeovil Football Club merging came about. Ernest Petter, later to become Sir Ernest in 1925 had invited the players, committee and more importantly the President of Yeovil, Ernest Davis, to a smoking concert to celebrate both clubs on the 10th January 1914. If his idea was to voice out the idea of a merger with Ernest Davis. He could not have picked a better day, the Petters 7-0 hiding of their Rivals earlier in the day must have sent shock waves through the Pen Mill club.

It would seem talks were taken place between the two sides and an agreement had been reached where they swapped players to boost each sides chances. When Petters United's Webb brothers turned out for the Glovers away to title chasing Branksome Gas, it resulted in a shock 5-0. In the report of the match 'Well-wisher'  a mysterious Yeovil fan, probably a journalist, who commented on matches, scribed :

'at the present moment two senior teams [in the town] are almost wasting their energies on various County leagues. There is sufficient talent available in Yeovil to form a team capible of winning the Western League and to also run a team in the county league.

I know there are difficulties in both teams thinking of its individuality but such difficulties are not insurmountable.

I make no apology in throwing out the suggestion "

It is not beyond the realms of possibility that 'Well-Wisher' knew of negotiations taking place, and the club(s) used the fact his comments were read by all football fans in the town and enticed him to use his column as a sounding board of how the footballing public of the town would feel of a merger. His comment was the talk of the pubs and cafes in the town.

A week later, the correspondent and fan who covered the Petters Matches, replied to the suggestion, it seemed that most in the town were in favour of a merger.