The Yeovil players, first team and reserves had chosen a novel way to celebrate the major success of the previous season. A day out by charabanc at Cheddar Gorge. Leaving the Borough at 1.30 and arriving back at 10.45 after a tour around the caves, cream teas at the Cliff Hotel and a stop off at Glastonbury on the way back.

One player from the previous season who wouldn't be there was Walter Pennell, a player who had played 36 matches for the Glovers  over the last two seasons scoring 21 times. Journalist Walter from the Western Gazette was off to China to take up a position with the China Morning Post. In 1941 after the Japanese invaded Hong Kong Walter was imprisoned in the infamous Shamshuipo prison camp, not many survived. Walter did though, after the war  spending the rest of his life in China becoming The Times Hong Kong Correspondent and even writing a book in his old age " A life with the Chinese '. Walter lived well into his 90's and died in Spain.

The sign of a good season was a Dinner and Dance at the Borough Restaurant, a chance to show off the cups, and indulge in a bit of mutual appreciation. Special guest this time Mr. Lewis, President of the Somerset FA, who expressed everytime he came to Yeovil FC he sensed he was amongst friends.

A new jeweller and watch maker called Clement White had arrived in the town the year before and set up shop in the High Street. Obviously he set about getting on the good side of the town and in an obvious publicity objective said he would donate a silver medal to the Yeovil player who scored the most in the season.  It obviously worked over 100 years later Clement White is still there!

At the AGM, the biggest item was the increase in profit now standing at a handsome £100. It would have been more howwever the club had donated nearly £50 pounds to local charities, including the Hospital and the nurses association. As the previous season was such a success it was a case of ' of it ain't broke don't fix it' as all positions were re-elected, including the President Mr Farr, who had become much loved by all. A schools football championship was voiced and if someone could come up with a cup, nobody saw why it couldn't be done.

Up the road at Brickyard Lane, a ten minute walk from Pen Mill, Petters United had been busy. Not being downhearted with ending up bottom of the Somerset Senior league the year before, this year they wanted to add the Dorset league also. They were declined. The Wiltshire League were more than happy to accept them though. In August a local correspondent visited the ground taking shape, it was a hive of activity. The pitch, 115 yards by 80, was being marked out, the goals were being erected, a group of men were erecting a grandstand. The problem of both teams having matches at home had been queuried, Mr Hare and Mr Sercombe had already met and as best as possible arranged fixtures so that when one team was home the other was away.

The Yeovil Town Band decided to get some practice in when the first and reserve teams had a 10 a side practice match before the season started. 300 souls also deciding it would be an attraction worth paying money to see.. Two people weren't there for a very good reason. Johnny Hayward and Harry Harbour, Johnny was marrying Harry's sister, Mabel and then off to Western Super Mare for the honeymoon. For the record the first team won 4-1.

The pre-season opener was unusually an away one this time at Exeter City reserves, a substandard side who 'played so well in the first half they forced two corners' as the press cheekily wrote, Yeovil losing 4-1 with Glanville up from the reserves scoring.

Dorchester Town became the first official opposition, when they visited Pen Mill to contest the Glovers in the Dorset League. On a sunny September, Yeovil starting where the left off the previous season, winning 4-1, with keeper Walter Sweet pulling off some miraculous saves. The opening side for the 1912-13 season being :

Wise and Glanville coming up from the reserves. Thurston came from the Minehead area and made a couple of appearances in the season.

The passengers on the Templecombe to Blandford train one Saturday afternoon in September 1912 must have had to rub their eyes in disbelieve. The sight of eleven players from Yeovil all dressed in football kit, moaning about rail connections. The Glovers had missed their connection and were now running late, they changed on the train. When getting to Blandford they caught the bus, still in kit. They arrived at 4.45, the match should have kicked off at 3.30. It was straight down to work for the lads. At half time and the score still at 0-0 it was an immediate change around in the twilight. Three goals in a five minute spell was enough for the Glovers to beat the reigning champions.

The English Cup came around again and for once it was a home match, Clevedon FC. A crowd of 1500 packed the grandstand and lined the ropes. Clevedon described as a team light in build against the Glover, however it was Clevedon who had the best of the first half. Walter Sweet in goal in tremendous form keeping the score 0-0. The half time lemon seemed to put some juice back into Yeovil's game, it was one way traffic and goals from Clarke and Charlie Larcombe put Yeovil into the next round to face either Street or Weston Super Mare away.

Petters United new ground must have been a pretty little place. No concrete, a  field with, surrounded by trees, roped off and with a new wooden grandstand, down the side. Yeovil paid a visit in the Somerset Charity cup and the grandstand would be used for the first time, it was well patronised with the crowd being put at 1300, mostly Yeovil fans, at Brickyard Lane. Johnny Hayward making his first appearance of the season. The pitch like Pen Mill was slopped from one goal to the other and it was Yeovil playing up the slope in the first half. The atmosphere in the crowd was described as friendly, except the odd occasion. As had happened in the previous season, Yeovil were far more experienced, it showed as they won comfortably 2-0 with goals from Charlie Larcombe, who lived just a stones throw from the ground and Clarke. It must have been an interesting experience for players from both sides. All lived and most grew up in the town. Some, on opposing teams now had played alongside each other previously, some even friends. I dare say the players all went for a pint afterwards in one of the pubs around. Idealic!

Street had surprisingly beaten Weston Super Mare, 2-1 after a replay and it was to them Yeovil travelled for the 2nd round of the English Cup. The Yeovil fans expressing they'd prefer to play Weston. Many Yeovil fans travelling to The Cobblers by brake, a primitive motor bus and some by cycling all the way. They weren't impressed with what they found, the pitch was in an awful state with one goal with so much straw around it, grass could not be seen. Charlie Larcombe was out with a sore throat and Clarke with a twisted ankle. So a make shift front line with Seymour and Hayward up front, should have been enough. A record crowd at Street watch the home side use kick and primitive rush tactics against the Glovers more used to scientific football. The primitive form won with a goal in each half.  With 'Well wisher' the Yeovil writer suggesting that it was a blessing in disguise as they could concentrate on the league.

The first Somerset league match of the season saw a  trip to Warminster a week later in front of a small group of Yeovil fans who attended and make some noise. Warminster back on the Wiltshire league days was never a happy hunting ground for the Glovers. However a near full side saw an exciting game with Hayward scoring his first goal of the season on a 4-3 victory.

The Yeovil and District junior league were struggling for funds, to assist them the Glovers Committee decided to allow them to play a six-a-side competition to be played on the hallowed Pen Mill pitch. However, with Frome visiting Petters United  on the same day, the attendance to watch were not so good. Causing questions to be asked why Petters didn't cancel the match or play at Frome,  £3. 5sh being raised for the junior league. 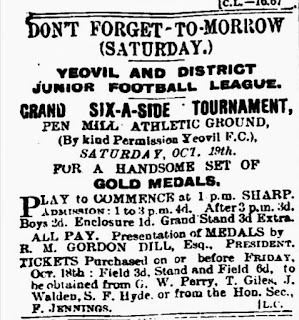 Petters United had had a average start to the season, Won, drawn and lost in their first three matches. Matches at home in front of a couple of hundred. Their loyal band of fans, were confident though of beating the Glovers for the first time when they visited Pen Mill. They were in for a shock within the first ten minutes it was 3-0 to the Green and Whites. Moments after going three down Gray the keeper fought for a ball whilst the four Yeovil forwards pounced on him like hyenas to rush the ball (and him) into the Hotel End goal with verocious kicking. Gray unable to continue after the assault was taken bloodied from the field. Ricketts replacing him. Ricketts being the player the Glovers had played illegally against Poole the season before costing them points and ultimately the Dorset title. Ricketts it turned out was a better keeper than Gray , keeping the score down to only 5-0 at the end. Hayward with a brace contributing. 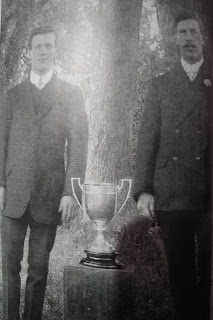