Eighty crowded into ex-President Maynard's Borough Restaurant for the now annual Dinner and Dance, the usual endless toast were given and songs sung. After the previous season they club had alot to celebrate. Special guest this time being Mr Frowde from the Dorset FA a man who had played against the club even before the Casuals were formed, which he reminded everyone in his speech.

A presentation was given to honoury treasurer Mr Ernest Davis for many years an important and much loved figure in the club, being one of the founding members. Mr. Davis, a teetotal strong member of the church, was  a man who could best be described  as 'busy'. A member of the town council, committee member of the Cricket club, gymnatics club, swimming club and horticultural society and ran the Boys Brigade. He also represented the town at water polo and was a qualified referee who a few months later ran the line in the FA Cup tie between Plymouth Argyle and Tottenham Hotspur.

The ropes around the ground were also being replaced, this time by corrogated iron fencing all around the edge of the pitch.
After the football club had beaten the cricket club, by 50 runs, William Barnes top scoring with 54, the AGM at Victoria Hall was so packed with players, members and fans thst it was voiced next season trying to obtain the Town Hall.
As one would expect it was back slapping all around, it was all change again at the top as the President Mr Newton resigned and Mr Blake, owner of a Glove factory in the town taking office . He, like Ernest Davis was one of the founding members and now found himself in the hot seat, although it seems the Presidency was mostly ceremonial and for prestige.
With the success, brought higher gates, none of the league matches the previous season had gates of under 1000. Which reflected in the now handsome sum of £66 sitting in the bank.
Strangely, when the captaincy choice aroused, Johnny Hayward's name was put forward and seconded. Strange in the fact that Bert Maughan captain the previous two seasons had been popular with the players and highly succesful. Hayward accepted, speaking to those gathered.
" I thank you for this unexpected honour and would do my best for the club and hoped we all pulled together. I hope to bring another cup to go with the ones we have and I propose Herb Seymour to be vice-captain"
Something didn't fit right with Hayward though, a day after the meeting he decided against being captain, stating work commitments in the glove factory wouldn't permit it. Although, one has to remember Hayward was still only 21 years old, maybe the responsibility on his young shoulders would be a heavy burden. A hastily arranged meeting of players and committee voted Bert Maughan back in as captain.
Elsewhere ambitious Petters United were advertising for a permanent ground, to end their nomadic ground rambling.
A trial match was organised at Pen Mill grandly called Yeovil v The Next eleven, one wonders if a match labelled Yeovil v Yeovil reserves would attract many hence the rather grand name. A good crowed did turn out to see basically a first v second match, with the first winning 4-0.
For the first time in years, Upton Park were not opening the season friendlies. This honour went to Salisbury  reserves who had renamed as Salisbury Amateurs and had joined the Wiltshire league. 500 lined the ropes or paid their extra 2d to sit in the Grandstand on a wet day. They were treated to an exciting game with the scores at 3-3, Yeovil scoring late to win. 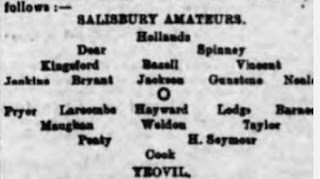 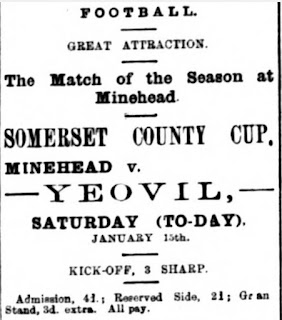 A fair size crowd in the rain and drizzle watched a make shift Yeovil side carve out a 1-1 draw and a reply a week later at Pen Mill. Confirmation of elections coming up were shown a week later in the replay when The Right honourable Aubrey Herbert (DL) turned up to watch. Nobody raised an applause and hardly anyone knew he was there and he slopped off before the end. As for the match, this time with a full side out the Glovers romped home 3-0 in front of a large crowd.
Something mysterious was happening surrounding Fred "Johnny" Hayward he failed to turn out on the 2-1 home win against Street, the first win of the season in the Somerset league. It had been known for some time Exeter had been keeping tabs on the young talented striker. A few days later, the Exeter press, excitedly announced that Hayward had signed Southern league forms at St James Park and was making his debut a couple of days later against St Lukes College.

A few days later again, the Exeter press again confirmed Hayward's signature but explained his abscense from games as Hayward suffering from influenza. Which may have been the truth through most of February he also wasn't in the Yeovil side.
Yeovil, without Hayward, who's abscence was put down to illness, travelled to Clevedon in the second round of the Somerset Cup. The pitch described as the worst in Somerset resembled a ploughed field, large puddles of mud with sawdust on top made football almost impossible. Yeovil fought hard in the mud and sawdust, despite leading twice they went down 3-2. Cup glory would have to wait another year.
In weather that you wouldn't leave your house for, Yeovil travelled to Street, hurricane force winds with heavy driving rain throughout the whole of the 90 minutes, made football impossible. The awful Somerset league form continued as again without Hayward the Glovers returned on the back of a 4-0 defeat.  The next day the full extent of the hurricane conditions were exhibited at Pen Mill. The roof of the Grandstand was now laying in a field along the side of Camborne Grove and the new corrugated fencing had all been blown over.
With a backlog of fixtures looking likely the club made the decision to play some midweek games on a Thursday afternoon - half day closing. The first of these matches being against thr Royal Garrison. The fans that gathered must have been more than happy to see Hayward, Exeter City and influenza,now seemed past him,as he lined up. He was back to his usual best as he netted twice in a 3-1 win.
Blandford turned up at Pen Mill still happy with their 1-1 against the Glovers earlier in the season, using their rather strange Rugby like attacking and rushing tactics. This time Yeovil were more prepared and were up for it, not taking the Dorset side lightly, which they had done before. Hayward again playing this time along with Searly from the Yeovil Thursday team. This time around the Glovers speed, skill and passing was too much for Blandford. With the Glovers 3-0 up Nesbitt in the Blandford defence was sent from the field after punching young Charlie Larcombe, the match ending in a farce as the Blandford players saught retribution on the Yeovil players at every opportunity. Final score 4-0. Young Sesrly scoring on his debut and picking up the plaudits. A rare Somerset league win followed. against Bradford-on-Avon, 4-0 with young Cheney enhancing his reputation with a hat trick.
The two victories set up nicely an away trip to top of the league and with a 100% record Boscombe with the Glovers just two points behind. Over 200 Yeovilians took advantage of the special train, which would not be returning until 11.00pm, giving fans a chance of sightseeing after the match. Boscombe, who as we know today as AFC Bournemouth, played on a pitch at Kings Park, and was considered the best 'enclosure' in the league. The match was one of the best of the season, played in a sportsmanlike manner in front of 2000, Yeovil with goals from Charlie Larcombe and Bill Seymour saw the Glovers 2-1 up, Boscombe equalising late in the game. Yeovil by many considered to be the best of the two sides on the day.
The return match, replayed after the unfortunate referee Battrick incident, came a couple of weeks later on Easter Monday. With the Glovers losing 2-1 at Branksome Gas just two days before, a victory for Yeovil was a must to keep their slim Dorset league hopes alive. A large travelling support from Bournemouth swelled the gate to 2000 at Pen Mill. Again a hard fought match saw young Cheney head the Glovers in front in the first half at the Camborne Road end. Despite an open and fast flowing game that was how it stayed, meaning the Glovers inflicting Boscombe's first defeat of the season, and their last.
With the Somerset league hopes well and truly out of reach and wanting to save the legs of some of the first team the club seems to have decided to use the remaining games to give some of the Junior players a chance to test them in Senior football. Yarham for example was from the St Michael's FC based not far from Pen Mill. He had a dream debut against Wells City scoring twice in a 3-0 win. It would be his one and only match.  The Somerset league season finished with three straight defeats, nobody cared, each team sheet being half filled with reserve or junior players, sometimes not even filling a full eleven.
Bournemouth Wanderers came to Pen Mill, by now Boscombe had been crowned champions. A Glovers victory would guarantee them Runners-up and the ever important medals. After the pitiful performances in the last three games and knowing the championship had fallen by the way side, a smallish crowd turned up. Hayward scoring a hattrick in a 4-1 victory. A Thursday afternoon 4-1 victory against Portland at Pen Mill ended the season, just a handful bothered to see Stan Bowerman scoring a fine hattrick.
Elsewhere, Petters had regained the Yeovil and District league again. Having decided that they would open up the side to anyone in the area and not those connected with the Petters factory, they were now talking of entering senior football, alongside Yeovil. The rivalry was hotting up.
Happy days..