The War was over

It would not be an easy return to normal at Pen Mill or the town in general , the players that survived gradually returned home to their loved ones, players like legendary Johnny Hayward who had enlisted into the machine gun corp. Of course, not all players had returned and had given the ultimate sacrifice to their country.

The 1914 agreement between Petters United and Yeovil FC it would seem had been forgotten, hardly surprising after what followed. In fact Petters United started playing matches in their own guise, using Pen Mill as their home pitch  With Petters workforce deemed essential workers they continued playing friendlies even during the war period. At matches all well attended against teams such as Royal Navy Brigade (Portland) and in front of 1300 on Carnival Day against the Australian Imperial Forces. The Aussies going down 5-0. One of the Australian forces team wrote a journal thst appeared in the Australian press, it seemed the beautiful girls of Yeovil being the biggest draw for the Australians.

By April 1919 a team labelled as Yeovil travelled to St James Park to take on Southern League Exeter City. Thy reality was it was a Petters United Factory team. Exeter goalkeeper being Dick Dym, who went onto become Bolton Wanderers goalkeeper in the first Wembley Cup final in 1923 against West Ham, famously known  as the White Horse final. Pym would eventually end his career at Yeovil. Playing for 'Yeovil' was Percival Nutland, recently returned from the war after fighting in France with the Somerset Light infantry, his brother Ernest sadly not returning, his name can be seen inscribed on the war memorial in the Borough, in Yeovil. Percival obviously impressed Exeter in the 0-0 draw, as he later signed amateur forms for them 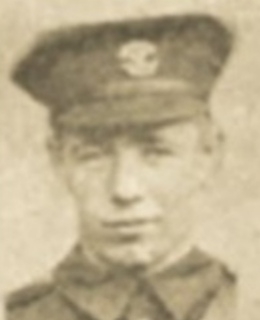 One former player not having the best of  times was William Hutchins a player predominantly with Petters United but had turned out for the Glovers before the War. Hutchins was caught at Waterloo Station in London after committing three burglaries in and around Sherborne and also a number of thefts in London. He was sentenced to four years at the Old Bailey, where it transpired that William Hutchins was just an aliase and his real name was Fletcher. Interestingly nearly 100 hundred years later, a workman whisky dismantling an old Gloving factory in Martock, and whilst taking up the floorboards found 'Hutchins's' Yeovil league medal from the 1913-14 season. 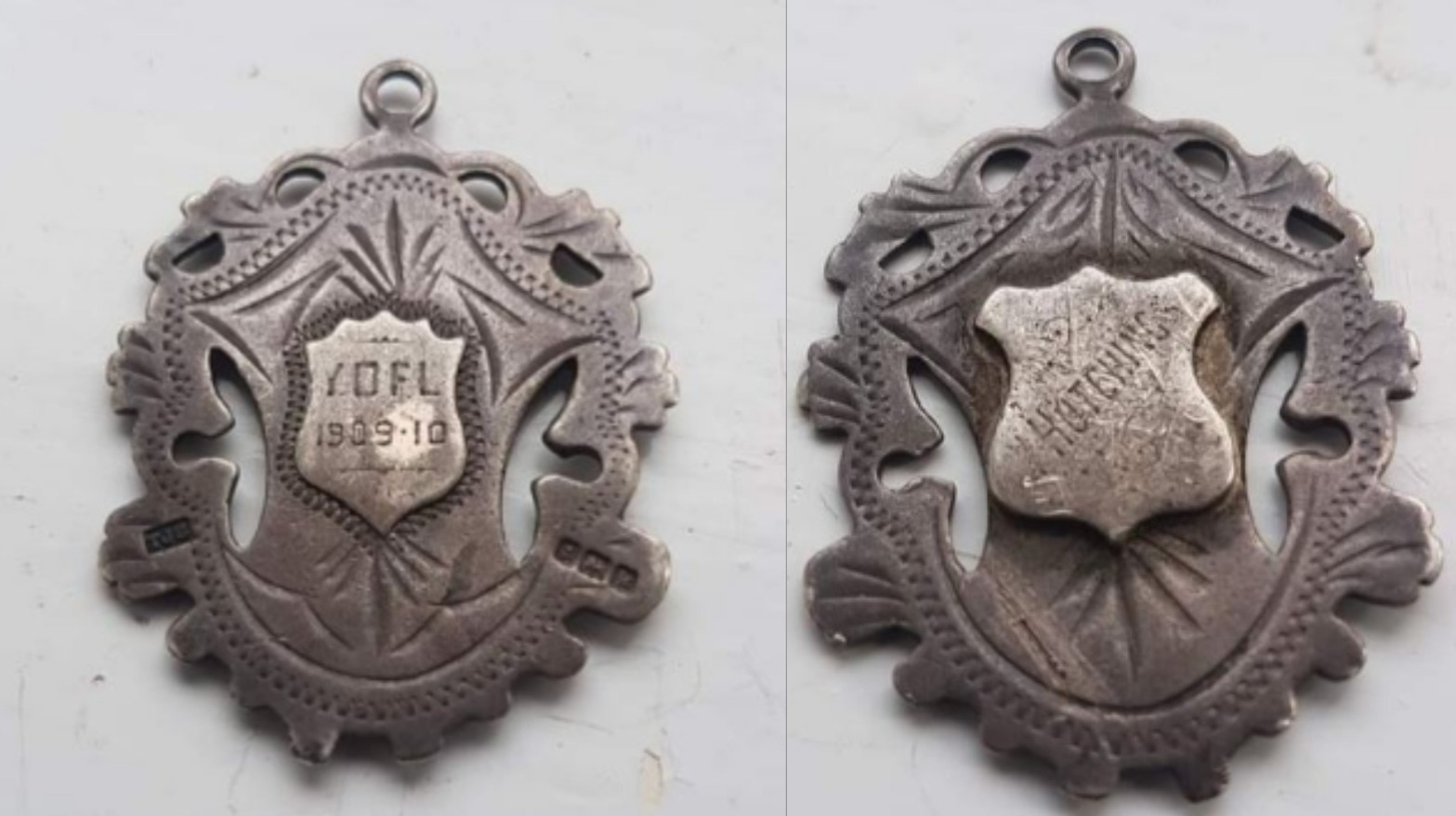 However, by June 1919 talks again had started between Petters United and Yeovil FC for a merger as per the 1914 agreement. At a meeting of the Petters club at the OddFellows Hall in Earle Street, Mr. Guy Petter set out the amalgamated plan whilat stating
" I, of course want to Petters [ United] taking a for oat place, however I am at the same time a Yeovilian and a great believer in Yeovil."
An application had already been made to the Western League for the new club which was to run four teams, two senior and two junior.  This gathered voted unanimously in favor of the amalgamation.
Two weeks later, on the 23rd June 1919, a meeting was held at the Town Hall to finalise the mergerx where a club committee of 40 was adopted, twenty men from each team to oversee the club. Mr Guy Petter, who could  be quite understood to be the original driving force of the amalgamation was voted in as it's first President. 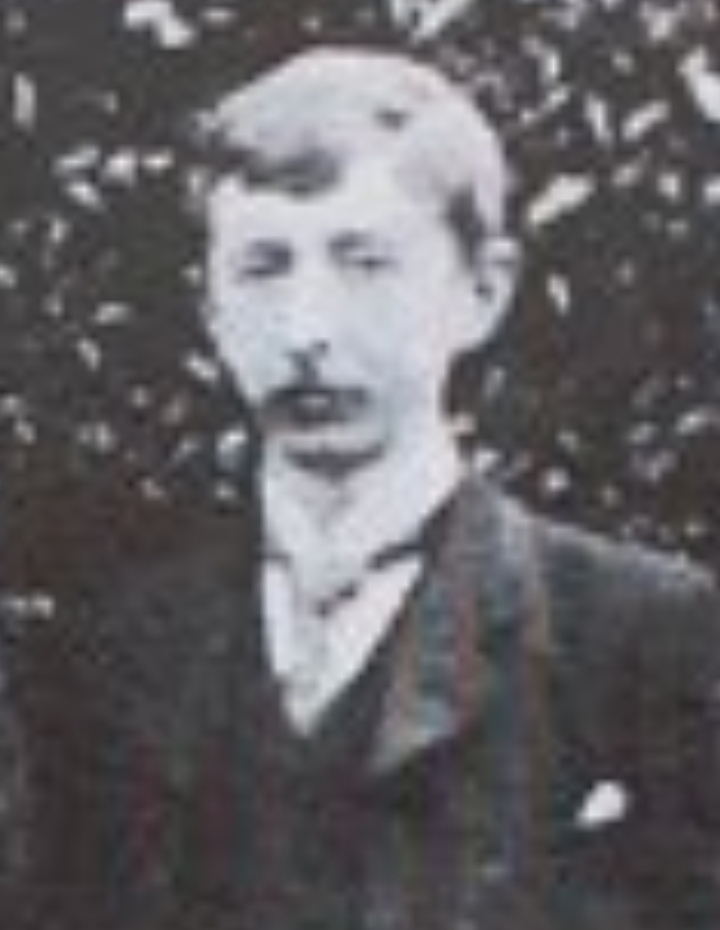 .                       Mr Guy Petter
One person stepping down would be Ernest Sercombe, the much loved and respected former player and secretary of the club. A breakdown in his health  being given for the reason. Mr Guy Smith (Yeovil) and Mr Hitchcock (Petters) being voted in as joint secretaries of the new club.
The club colours were discussed and decided on white shirts, with the town crest on the left breast and navy shorts. A kit of those colours had already been brought in 1914 and would be used for the following season.
As the two teams had agreed to input equal amounts of cash to the new venture, Petters organised an Aircraft Open day and Gala to raise their share, an event which was attended by 1500. 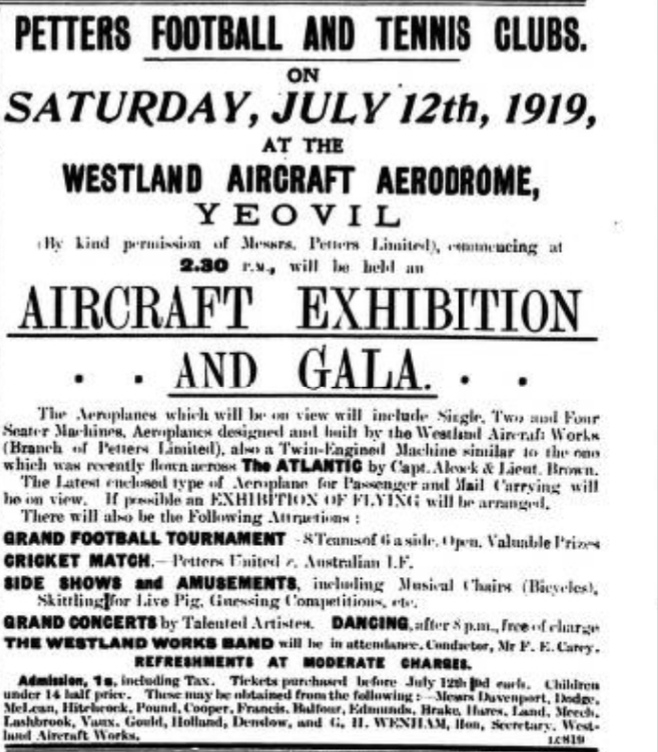 In all four leagues would be entered, the Western League Division two, the Somerset Senior league, the Dorset League and the Wiltshire league. Of course, the increased cost would mean higher admission prices, which would be
8d - Admission to anywhere in the ground except Grandstand
1sh - Admission to the Grandstand
3d - Admission for boys
7sh 6d - Season ticket to the ground
12sh 6d - Season ticket to the Grandstand
So. It was all systems go for the club in it's new form. A season that would see over 80 matches played by the club in different leagues, a far cry from the 38 it played in the 1913-14 season.
Happy days