It seemed there had been a case of jealousy amongst the players if who was chosen for the first team. At the AGM of 1903, the chairman hoped that it would be not be repeated again for the following season. In total thirty-three players had turned out for the first team in the 1902-03 season.

The Galloping Major Kelly finally got his wishes and his resignation accepted and the new a president was an old face, William Maynard, sausage maker to the Queen and the biggest restaurant in town located  in the Borough. He had added this 'empire' and as now running cafes at railway stations and opened the Borough restaurant. Up until the 1930's his  advertising hoardings could be seen at Huish.

The insurance of players was on the agenda after a couple of leg breaks the previous year, with the club offering to pay half the insurance cost of the players.

As for the forthcoming season both the Somerset and Wiltshire leagues would be contested with the reserves competing in the newly formed Yeovil and District league.

Those attending the AGM were in uproar when it was announced that Poole Town FC owed the club seven shillings. A strongly worded letter was drafted to the club and the Dorset FA.

After the annual opening match with Upton Park, which saw few spectators interested after a 4-1 defeat, the opening match came away to a very strong Chippenham in the Wiltshire league. The Casuals exceeded all expectations by returning home to Pen Mill with a 7-4 victory with a side missing two of their best players, Seymour and Luftman. The opening team being

The Ewens were related to Sam Ewens one of the biggest Glove manufacturers in the town.

The Chippenham victory was followed up with a 4-1 away win against Glastonbury in the Somerset Senior league. In a match where the goalkeeper seemed a bit of a mystery named as 'A.N.Other' in the local press. Herbert Cook the usual and highly thought of keeper, had been criticised by fans in the local press for showing up for matches when he 'came to a sense of interest. It was pointed out that the fans would rather have a lesser  keeper who played with a hundred percent heart than Cook who obviously didn't.

The FA Cup draw had been unkind, and sent the Casuals to Hamworthy to play Longfleet St Mary. As per usual the Glovers fans took advantage of a football special and many were in attendance in the 800 crowd. The match was later described as an embarrassment, as the Casuals returned back to Pen Mill with their talks between their legs on the back of a 4-1 defeat. Although, players and fans alike complained of the standard of the refereeing and the 'rough play' of the Dorset side.

The Casuals responded well though, with two home wins on the trot, firstly against Bradford-on-Avon 4-0 and secondly when Bath Railway paid a visited to Pen Mill, returning back to 'up North' on the back of a 5-2 defeat. Bath Railway would a few years later change their name to Bath City and would have many battles with Yeovil in later years.

Unfortunately, as in previous seasons, when winter fully set in, the Casuals would go through stages of some awful performances. After the Bath Railway match, Casuals wouldn't record another win for ten games.

The winter of 1903 was one of the wettest in records, with widespread flooding throughout the country especially the South-West. Pitches were flooded, however with the prospects of abandoning matches and finding dates for a reareanged fixture was almost impossible matches took place on pitches of mud and laying water patches. Pen Mill faired no better. The visit to Peasedown near Bath for a Somerset Senior league game was another game played in torrential weather in front of just a handful of spectators. The Casuals arrived in torrential rain with the field 'with hardly a patch of green to be seen'. Although the match started with the rain never ending. It became so bad that running became impossible let alone kicking a ball. After sixty-nine minutes, all had had enough and the referee called time on the farce that was taking place. Yeovil the happier, they were two-nil down.

On Boxing day 1903, the Casuals encountered a problem that was becoming common place. Two fixtures on the same day. Both away, Devizes in the Wiltshire league and Radstock in the Somerset league. The reserves were sent to Radstock, which as usual resulted in the club being reported to the Somerset FA for sending a weakened team, especially as a large Boxing day crowd had gathered to watch the proceedings. Both matches being lost, Devizes by 2-1 and Radstock 4-1. It was turning into a miserable season. Some players being accused of picking and choosing which matches they wanted to play in and finding excuses not to travel to away matches, especially in Wiltshire.

When the referee turned up 45 minute late at Warminster, the players were reported to be suffering badly from the cold rain with players shivering before a late kick off. A match that finished in semi-darkness and again heavy rain with the score at 2-2, again played in front of just a handful of spectators. 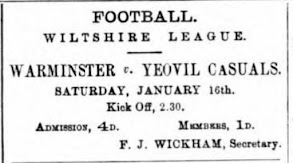 Elsewhere in the town, eye-brows were being raised at the talk of a new club looking to start in the town. A club being formed with the backing of the company which would give the name to the team Petters United. A team that was already scouting for players even before being formed. It would wlso eventually be a club that would change the course of football for Yeovil.

Even though the rain continued, the Casuals welcomed Glastonbury to Pen Mill in February, with the Tor boys being despatched 10-0. Leonard Vassell returning from his studies at Oxford University to help himself to five goals.

The season continued at a a win would be followed by a defeat and no rhythm in the results was taking place. It was interesting to see some of the reserve players jumping ship mid season and could be seen in the team sheets of the newly formed Petters United side, who were playing at a variety of venues from West Hendford to Victoria Road. Also worth noting was their slowly increasing crowds. With 2-300 attracting matches in the Yeovil league.

Incredibly of the results were mediocre, in the Wiltshire league so were every teams. Incredibly it came to the last game of the season against Chippenham at home with the Casuals with a slim outside chance of Wiltshire league championship glory.

The Chippenham match also corresponded on the same day of a visit to Paulton Rovers in the Somerset League. A mixture of reserves and third team players being sent to North Somerset to play in what could only be described as a Lambs to the slaughter situation. Paulton needing to win to be confirmed Somerset league champions, they did! Beating the weakened Casuals 15-1!

In all a disappointing season all round, awful weather meaning matches were played on bogs, meaning performances that were uninspiring for the Pen Mill faithful.

Glances were starting to be thrown to elsewhere at Petters United who from a standing start had already attracted fine support and had strong ambitions and financial backing from the company that took its name. The even had a nickname The Pets!