A Grandstand appeal was made in the summer of 1905. As we know, a grandstand was already in place at Pen Mill, built in 1899 for the visit of Oxford University. So, it would appear it was to extend the stand to entice more spectators in comfort to Pen Mill. £13 was quickly raised with President Mr. Maynard putting in the last £5 himself. The original builders Bird and Pippins were again employed to undertaken the work.

The grand sum of £25 lay in the club account at the Wiltshire and Dorset Bank , although the previous season had seen gate revenues increase to a record sum. The rent of the ground at Pen Mill had gone upto £10 about £1300 in today's (2021) money. It also seems the commercial side of the club was starting to open its eyes as £8 was raised in advertisements around the ground.

For the 1905-06 season the Somerset League was kicked into touch with just the Somerset Junior Cup entered in the club's home county.

Upton Park played in the traditional opener, this time including Tom Barrage, a Gold medal winner at the Paris Olympics. Gold medal or not, few bothered to turn out to see the Londoners win 7-1, few cared!

Bath Railway had transformed themselves into Bath City during the summer of 1905, and it would be they who turned up at Pen Mill to open the season proper in the Wiltshire League. A few hundred saw the usual good start by the Casuals winning 3-1 whilst also missing a penalty in the process. The team for the opening match being:

Gleave, Coates and Gard promoted from the reserves whilst Lodge joining the Casuals from Stoke-sub-hamdem. One player that would be sorely missed would be star striker Leonard Vassall who had left the town to attend Newcastle University.

Trowbridge were next at home, and the spectators witnessed an incredible match. With the Glovers 4-1 up, all seemed to be going well until Gleave turned his ankle and had to be carried from the field, a few minutes later Hoare was next off the pitch with a twisted knee, 11v9 soon became 11v8 as Cole fell heavily, breaking his wrist in the process. The last 15 minutes resembled the Alamo as the eight in Green and White encamped in their own penalty area, in an attempt to keep out the constant Trowbridge attacks. They succeeded with the boys in Green and White heroicaly holding out to win 4-2. Reg Luffman scoring a hat trick.

After a make shift side had despatched of Warminster 4-0 in the Wiltshire League, it was time for the English Cup. The draw had been kind to the Glovers for once and had given them a home draw against Paulton Rovers, a team renown for their hard play and rowdy fans. A goal in each half from Peaty giving the Glovers a fine 2-1. Sat in the grandstand  was William Peake-Mason, the Conservative candidate for the upcoming elections, he invited the Paulton Rovers players back for tea at his home in Trent, obviously in an attempt to win the miners over! 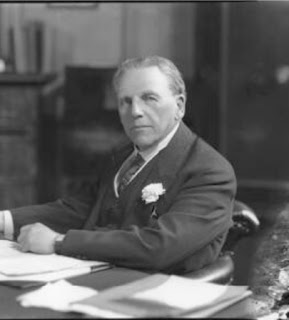 William Peake-Mason
Two defeats followed, away to Melksham and home to Frome. The Melksham result being disputed by the Casuals as one of the Melksham players, Danials resided outside of the five mile zone, a system where all players had to live within five miles of the clubs HQ. The Wiltshire FA Committee called on the county surveyer to measure the distance. Yeovil's complaint was upheld at a later meeting, even after Melksham had given a map by the Local flying club  as evidence and the match was to be replayed! Replayed it was in January with the Casuals winning 2-1.
Green Waves FC, in Plymouth derived their name from  high waves around the Plymouth coastline. Originally formed in 1896 by local trawlermen. Green Waves FC in 1905 were rivals to Argyle, by now a Southern League club . It was to them that the Casuals would travel to in the next round of the English cup. The furthest, to this point the club had travelled to a match. The railway organised special prices of 4sh 3d for any fans wanting to travel. Many did!
On an inhospitable open pitch on a wet cold with the wind blowing in from the Atlantic, Glovers took the field against the Green and Maroned shirted, much fancied Green Waves. Against the run of play in the first half, Hamblen, up from the reserves to replace the injured Hoare, scored to put the Casuals one up to 'much applause from the Casuals' s fans'. The 'Waves' equalising just before half time.
The second half kicked off with the wind in the Casuals favour. However, early in the second half, Herb Cook in goal for the Casuals parried a shot causing a scramble in the goalmouth. The ref, inexplicably blew his whistle causing all to stop, except a Green Waves forward who calmly side footed it into the net. The ref, for some reason or other allowed the goal to stand., causing strong protest from the Casual players. It was not just the players, one Yeovil fan ran the full length of the pitch in an attempt to attack the official !
The goal knocked the stuffing out of Yeovil, they capitulated, finally losing 5-1. The English cup was over for another year!
Back to back matches with Devizes followed, at home the Casuals chose Hamblen upfront again after his impressive debut at Green Waves, he repaid it by scoring two in a 4-0 win. The match was chosen as the Yeovil Hospital fund match. Where, the Casuals showed their commitments to local social issues. All gate receipts and a collection at the ground were, pre-NHS days, given to the Yeovil hospital. A fine sum of over £9 was later handed over. However in typical Casuals fashion against the same side away  a week later they lost 5-3. 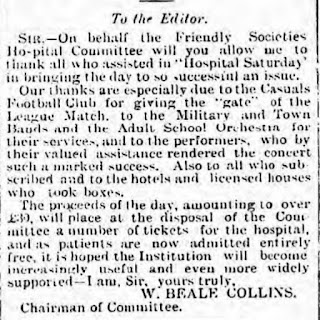 The problem with communication in those times came to the front when a friendly match with Swindon St Marks was arranged at Pen Mill in November. On a Saturday morning Yeovil was hit by a snow storm covering the pitch completely. A hastily written telegram was sent to the Swindon HQ to cancel the match. Too late, Swindon were on their way! The match would have to be played. In sub-zero temperatures and snow still laying around only the very brave witnessed a Casuals 5-0 win.
The season continued in December with a mix bag of results, a notable one being against high flying, and probably longest name in football 121st Regiment of the Royal artillery Trowbridge. Being two down and reduced to ten men after Reg Luffman had been taken off injured the Casuals fought back to gain a credible 2-2 draw.
Christmas arrived at Pen Mill and for once the football loving public were treated to some decent friendly holiday fixtures. Three matches in three days. The first, on Christmas afternoon, being a Casuals v Yeovil District league XI, a team containing a teenage Johnny Hayward. Saw the Casuals run out 4-1 winners
Secondly on Boxing day the London Caledonian FC turned up. The Caledonians formed in 1896 were made up solely of Scotsmen living in the capital. With their famous horizontal black and white thin striped shirts, they became the inugaral champions of the Isthmian League in 1905.
A reasonable Boxing day crowd gave a warm welcome to the Scotsmen, and a mixture of first and reserve players played out an entertaining match, ending in a 3-3 draw.
The following day, Plymouth Argyle turned up. As stated earlier, not the top team in Plymouth at the time, but still fine opposition, and a professional side to boot. A massive crowd of around 2500 turned up at Pen Mill to witness again a mixture of reserves and first team win an exciting match 2-1 against their professional opponents. Although the Plymouth press played down the defeat by stating it was Argyle's reserve side, which it was! Some of the Yeovil players were playing their third game in three days!
With the festive season and friendlies out of the way, Wiltshire League football returned to the Casuals a credible 2-2 draw at Bradford-on-Avon was followed up with a trip to Trowbridge to take on league leaders the 121st RA Trowbridge. The Casuals sent a very weakened team, and discovered the pitch was not fit for football at all. The Army boys, seemingly used to it, decided to get some shooting practice in and ran out winners 8-1.
It is worth noting when checking the team sheets that regularly key players were willing to turn out at home, but were conspicuous in their absence for away matches. It is left to the imagination if these were forced or willing absentees. To this point the Casuals hadn't been beaten at home in the league season, away from Pen Mill was a total different story.
Yeovil fan Athur Hawkins it is safe to say had had a few ciders before entering Pen Mill before a friendly with Weymouth in a January, his behaviour being so disgraceful that Fred Bond was forced to assist with the arrest after Hawkins had knocked a policeman's hat off whilst using disgraceful language. He was fined 10 shillings!
The season took on the same identity as previous seasons post New year. The clubs unbeaten run at home came crashing down with consecutive home defeats to Melksham and Bradford-on-Avon, in March. The defeats were all forgotten when Chippenham United arrived with only ten players, one having missed his train, Yeovil again at full strength winning 8-0.
The away situation was really exposed in early April, with identical 7-1 defeats against Wootton Bassett and a week later to Bath City. The Wootton result, saw Yeovil turn up with only two regular players with the rest reserve players. Herb Cook the goalkeeper played up front. However a penalty to Bassett saw Cook return in goal, save the penalty and then return back up front. The season was fast becoming farcical!
A prestigious Easter fixture was arranged with the Coldstream Guards and a large crowd, now enjoying the friendlies more than the league matches, saw the Guards run out 4-2 victors.
The season came to an end away to Chippenham United, a team that the Casuals had beaten 8-0 a month earlier. The usual thrown together side heard north and in a match played in hail stones, they returned back to Pen Mill having lost 3-0. Another disappointing season saw the Casuals finish 7th in a 12 team league.
Even more alarmingly the ambitious and emerging Petters United had pipped the Casuals reserves to become the Yeovil District league champions.
Happy days!