The 1976-77 season had technically ended for the Glovers. A seventh place position in the Southern Premier league was not seen to be good enough for the ever demanding  Glovers fans who wanted and expected more! Stan Harland's bombastic reign was nothing short of controversial at times. A player that oozed class on the pitch mixing it at times with thuggish tackles and actions leading to an awful disciplinary record.

Additionally Harland had a penchant for having a complete lack of respect for senior players or their past achievements. A prime example of this when fans favourite Dicky Plumb referred to the manager solely by his surname. Harland paid in kind by doing the same to Dicky.

Stan Harland was also never one to shy aware from giving his view, sometimes in what appeared pure arrogance to the fans. Blaming the playing woes on everything and anything, usually the Huish pitch, apart from his team selection and tactics. Rumours, later confirmed, reported players struggling with his 'my way or the highway' attitude. One former player in later years describing him as the most arrogant and worst manager he'd ever played for.

Things off the field of play were just as troublesome the club debts rising year on year. Assisted with a high increase in the wage bill under Harland. The board putting out that if it continued within three years the club would fold.

The Anglo-Italian Cup was seen as a way to increase dwindling revenues, the board banking on high crowds to witness Yeovil playing in competitive matches against European opposition. They were wrong. Over the two matches against Turris and Bari, barely 4000 had attended.

With all that said, The Glovers were still in with a great chance of reaching the final in Italy. Lieing top of the English group.

Stan, who had two Anglo-Italian Cup winners medals already under his belt , wanted a third. The players had no let up and were training for the three weeks between the league finishing and before Yeovil's European debut.
So in mid June 1977,  two months after the English leg of the games it was time to head off to Italy and  Yeovil's first ever matches on foreign soil.
The Green and White supporters club had been advertising in the programme throughout the season for any fans who wished to make the trip to Italy .   This at a time when the good folk of Yeovil holidayed mostly in far flung places such as Weymouth,  Minehead and for the continentally minded, the Isle of Wight.
The program advertisements though reaped rewards and  at least three supporters took up the chance to travel to Italy amongst them Derek Norman and Ian Wild and Les Wallis,  who can lay claim to be the fans that  have travelled the longest ever to watch a Glovers match!  It certainly must have been a trip that every Glover, then and since has envied.
The players thankfully didn't have to fund their own trip. The Anglo-Italian committee had given each club finances to pay for it. Which kind off begged the question where did the Anglo Italian committee get the money from? Their was no sponsorship or TV rights.
The squad arrived at Gatwick Airport along with John Lukins from the Western Gazette and Brian Moore the chairman who decided to add romance to the trip and brought along his wife.
The Glovers party, boarded a Dan air flight and into an old Comet 4 plane,  one of the last in existence,  and jetted off on the three and half hour flight  to the small Pescara Airport on the Adriatic coast. From there the squad and fans boarded a bus and set up camp in the beautiful coastal resort of Montesilvano,  a short ride North of the city of Pescara. 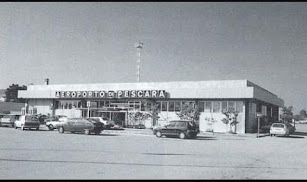 Any idea that the journey was going to be a jolly for players was soon curtailed as  Stan Harland always a stickler for fitness, had organised for the players to train in a local sports hall. When that was closed it would be training on the beach.
There was one major problem the players faced though - sleep!  It transpired that the biggest team in the region,  Delfino Pescara had chosen to celebrate the arrival of England's finest Non League team by winning promotion to Serie A for the first time in their sixty-five year history!  Resulting in fans celebrating Italian style with car horns and singing all through the night! Which conjured up images of  Stan Harland marching red faced to the reception in his pyjamas to complain!
The first match was on the Wednesday evening against a team called Teramo from the town with the same name just an hours drive inland from the Glovers's hotel.
Teramo had sent quite a large group to England to play their games including players wifes and the local mayor.  As they ended up playing at Scarborough and Northwich the words shock and culture comes to mind! They credibly came away from Scarborough with a 2-2 draw only to find Northwich Victoria's Drill Field ground not much to their liking, losing 3-1.
Now,  Yeovil and Terama had quite a few things in common. Both small towns with similar populations,  both in agricultural areas,  both teams with a long proud history in the lower leagues . Most strikingly though was they both boasted small compact stadiums right bang in the middle of the town .
With Terama's stadium though it could have actually been shoe horned into its compact space.  To one side of the stadium lay a school which measured just yards from the actual pitch!  In the surrounding sides were small high rise apartments with balconies overlooking the pitch,  balconies where the occupants would place Teramo flags on match days.  The locals,  as the citizen's of Yeovil were very proud of their little club, and rightly so. 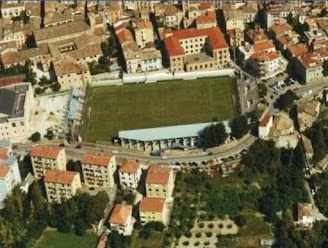 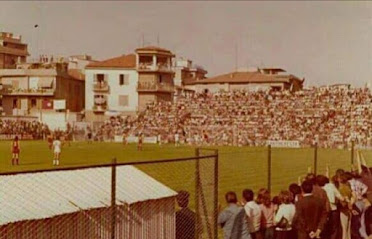 And so,  on the evening of the 22nd June 1977, Yeovil Town made their first ever appearance away from British shores!
The teams entered the the field from the small cramped changing rooms at Teramo's stadio comunal!
The away changing room at Teramo
Playing in an all white strip with green flashes on their short sleeves against Terama in their 70's stylish all blood red with three white small lines down the left side of their of their shirts.
Unlike the Turris and Bari sides that Yeovil battled with in England,  Teramo were a team of no real big names either past or in the future in the Italian leagues.  They were to a man all lower league players and employed in the various industries throughout the town.
Probably the most famous person on the pitch was Ricardo Lattanzi, the respected Italian referee who took control of many World Cup matches during his career.  Even today the award for the annual best Italian referee is called the Lattanzi award.
Lattanzi blew his whistle and got the match underway.  With the temperature touching the mid 20's,  the home team took the game to the Glovers from the off and Yeovil struggled to match their Italian counterparts.  Teramo taking the lead in the 35th minute through young midfielder Patrizio Minnozi.  Much to the delight of the vocal Teramo fans behind the north goal and on the balconies.