In the early days of Yeovil Casuals, a rivalry was formed between clubs to the North. Teams such as Radstock and Midsomer Norton. Flirtations of rivalry were also made with Wells City who found any excuse to go running to the Somerset FA with an objection if the Casuals had the audacity to beat them.
Then there was Bridgwater after their infamous behaviour after the Casuals had won the Somerset Challenge Cup against them in 1899. Ending with the humiliation of Yeovil having to hand the cup back.
All these minor rivalries slowly died away after a few seasons. I doubt there is a Glovers fan alive that sees those teams as just a nice easy trip away on a Tuesday night in the Somerset Professional Cup.
One rivalry was a slow burner, it smoked away for a few years until fans on both sides readily accepted 'we hate them, they hate us'.
Now, let me say this from the off. I love Weymouth, great sandy beach, nice se although I once swam head first into a full nappy there , great old tradional pubs, easy distance for a nice day out. Even as a child some of my fondest memories apart being at Huish is having lovely caravan holidays at Bowleaze Cove.
However, even on those wonderful holidays, it was there lurking like Dracula's Castle sitting on top of a beautiful snow capped mountain! Taking a pedalo ride on the Swannery, you could see it in the distance. The side of a small horribly blue like coloured stand with just six letters in an equally disgusting shade of red. W.F.C. LTD It was enough to turn my face away as soon as my eyes caught sight, Even on the brightest and hottest days, it always looked a cold place with dark clouds hanging over it. I hated that place, the people connected to it and all it stood for. 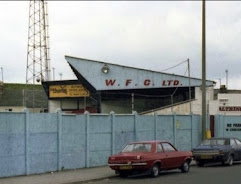 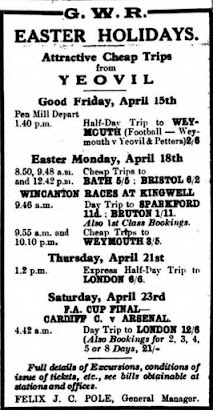 However two years later, with debts rising Weymouth returned to amateur football, returning to the Western League Division two. Without a doubt looking on with envy whilst Yeovil continued growing. For the next ten years, the only match being the FA Cup 4th qualifying match against 'them' in November 1934. Yeovil winning easily 6-2 in front of 4500 fans. The Weymouth keeper, Hollear keeping the score under double figures.
It stayed that way up until the outbreak of the Second World War. Yeovil slowly beggining to rise, Weymouth left to play our reserve side!
So, for over twenty years there was just one derby match. We'd almost forgotten about them. However, it was the beauty of the FA Cup that ignited the rivalry again. In 1948, Alec Stock's great side were drawn away to play Weymouth, again in the 4th qualifying round. To say Weymouth and their fans were excited would be putting it midly.
When the tickets for the match went on sale in four shops in Weymouth town centre, Weymouth fans were queing at 7.00am. So upset when some fans couldn't get hold of a ticket, police were called in to calm their excited fans down. The police raised the capacity to Weymouth's tiny little ground to 11,000, so more people could get to see Alec Stock and his team in their town. Their team so thrilled they all went to Studland and Swanage to practice and play golf to stem the nerves and excitement.
What was described as a 'Yeovil invasion' happened on the day, with Glovers fans filling every train seat down 'South' from the early morning. Others travelling by car and any transport possible. 3000 Glovers managed to get tickets with 100's of Yeovil fans locked out. The attendance of over 11,000 still to this day remains a record for Weymouth. On the day Weymouth were completely outclassed by the fast Yeovil attacks, Eric Bryant scoring a couple in a 4-0 victory. A victory that set Yeovil on the way and finished with a visit to Maine Road, Manchester to take on Manchester United. The match with Weymouth finished in an absolute downpour. Which resulted in many Yeovil fans unable to return home until the next morning. An extra opportunity, one guesses, to rub it in at night time in the pubs of Weymouth. 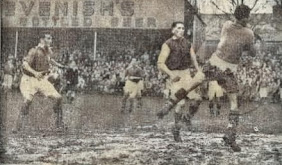