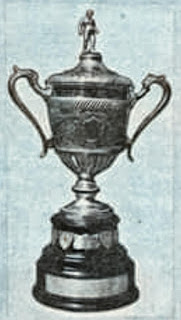 As we saw previously the 1898-1899 season, although having highlights ended in despair. However, the despair was heightened by the Casuals experience in the Somerset Challenge Cup. One in which Bridgwater was to become on a par with Wells City as a side that the Yeovil fans would hate with a passion!
It all started  with a nice little trip to West Somerset to St.Decumans in Watchet. Watchet were a very strong team and had easily beaten Yeovil the previous season. So, in the first round Watchet saw a visit by the Yeovilians as although not a walkover, very 'doable'.
Watchett, still playing today in their red and black kit, advertised the match in the local press as the first in this competition ever to be played in West Somerset. Admission  was 3d or 3d extra on the reserved side where you had the luxury of boards to stand on! 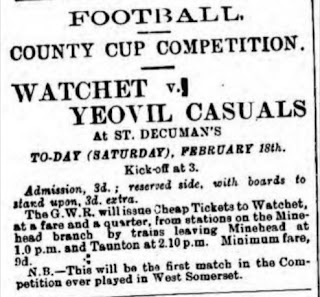 The Yeovil Casuals turned up with confidence though after beating reigning Somerset Champions, Street, 3-1 the week before. Two of the Yeovil players, Wyatt and Luffman already well known amongst the West Somerset crowd. Bob Wyatt's reputation went before him,. At eighteen stone, six foot four, he was described as a 'collosus of a man'.  Yeovil's forward Reg Luffman was  educated at Queens College, Taunton and had played at Watchet many times before.
In a hard fought match, where Watchet had the majority of the game, Yeovil won 1-0 with a thunderous shot by Beare, that stung the hands of Chidgey in the Watchet goal and flew in.  Watchet made up of seafaring men like Chidgey in goal and Organ up front, weathered the storm and attacked for much of the second half but to no avail. The West Somerset corresponding at the match commenting that the forwards were the reason for the loss. Though his description of the the Yeovil forwards was such:
"The Casuals front rank did some very good
work collectively, and they had a  splendid knack of feeding their ' heavy 'un-Wyatt-whenever a favourable opening occurred. It took a lot to pull " Big Bob" up once he had got under weigh (sic) , and his shots were quite of the catapultic order"
The win placed Yeovil straight into the semi-final where they would face Burnham. The other Semi being between Bridgwater and Street.
Burnham arrived at Pen Mill on the 18th March 1899 with a high reputation, having beaten Radstock 4-0 in the previous round after a reply, in front of its highest ever crowd.
The Somerset Challenge Cup was a relatively new competition and hadn't quite grasped the attention of the Yeovil public. Barely, five-hundred turned up at Pen Mill, paying their 3d and entering through the gates.
The match was pretty much a one sided affair, the highlight of the first half was Ewans the Yeovil midfielder scoring from a pot shot from the half-way line. The red shirted Burnham team came alive in the second half and attacked down the slope towards the Camborne End, but to no avail . Big Bob, the farmer from Maiden Newton scored a couple and Beare finished it off near the end. 4-0 to the Casuals!
Bridgewater had caused a shock! Facing Street, the reigning Somerset League champions, they had scored twice in the last ten minutes and had beaten them 2-0 in a replay on Street's Victoria Road ground. 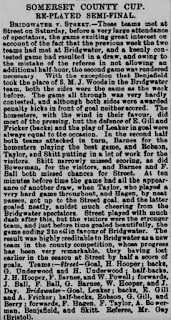