Christmas came with a couple of low-level friendlies, one against Old Weymouthians, lost 1-0. Followed up with a game advertised as 'The Professionals of Reading football club "which in truth was mostly Reading reserves, a match more remembered for Gilbert Vassall making his first appearance of the season. He had spent the previous few months touring with the Corinthians in South Africa. He celebrated his return by scoring all four Yeovil goals in a 4-4 draw.
A victory finally came on the the 6th January 1899 a four-nil win over Radstock at Pen Mill. The pitch being described as in a shocking state of affairs. Vassall playing his first league of the season. Despite the run of bad results up to the Radstock match, the win put Yeovil into second place, a point behind Street, who also had the advantage of a game in hand.
Sherborne visited Pen Mill at the end of January, a keen rivalry had started between the two clubs. Sherborne aware of the Casuals sniffing around their best players to bolster the strength of the Casuals side. On a cold and windy day, refereed by Sergeant-major Butler, Yeovil beating their near neihhbours 3-1 in a well contested game played on a Pen Mill pitch that resembled a bog. It should be remembered that before the first team games the 'B' team would play, something that wouldn't have helped the now sodden pitch.
The 'match of the season' was how the the Billboards around the town described the visit of Street on the 11th February 1899. Street top, Yeovil second in the Somerset Senior league. Again, a cold and windy day, again the pitch resembling a cow field after the rain. Notwithstanding, 2000 spectators turned up at Pen Mill hoping for a Casuals's victory and keeping their championship hopes alive. One can imagine the groans around the ground when it became apparent that influential captain Fred Bond was indisposed again added with that Vassall was out injured.
Street started like a steam train, full of confidence the reigning champions attacked the Hotel End goal at will. After five minutes they were 1-0 up. Barnes scoring with a weak shot sending the Streetonians in the crowd crazy with delight. Things got worse, Big Bob Wyatt, the eighteen stone Yeovil forward entered the box with just the keeper to beat at the Camborne End, as he pulled back his leg to shoot, Marsh the Street full back kicked his leg away. Penalty!.. But no! The referee waved play on. Immediately Street took the ball to the other end, Underwood shot, the ball hitting Luffman's arm in the penalty area. Unintentional. The referee disagreed, and awarded the penalty to Street! The crowd bood and hollored at the the decision. Underwood stood up to take the penalty, Palmer in the Yeovil goal facing him. Hard and low Underwood shot, Palmer equal to it turning the ball around for a corner and the Yeovil crowd cheering their new hero.
As is the case, Yeovil were bouyed and now full of hope that Palmer's save had given them. Within minutes Big Bob Wyatt had equalised. Staying 1-1 to 'sucking lemons'. The second half was a end to end stuff, the crowd wild, until seven minutes before the end, when Hann scored at the Hotel End, followed by Big Bob scoring a third a minute later. The hopes of league success were still alive. Just!
The result obviously given a new self believe as the side remanded unbeaten in February, the highlight being a fine 5-0 win on their travels against Bournemouth. A match that highlighted Sherborne's earliest fears of Yeovil sniffing around their players. Harry Seymour, by far Sherborne's finest making an appearance for the Casuals.
If Street was described as 'the match of the season' it was nothing compared to the visit of the Oxford University team, on the 11th March 1899.
It is hard to fathom these days of why such interest was taken in a visit by the Varsity side. Well, one thing was the prestige, in the days before TV and radio and instant fame, these were the players who's photos would be in the newspapers and in cigarette cards. As, we have seen Yeovil Casuals very own, Gilbert Vassall was famous throughout the land. Solely for his association with being captain of Oxford University and Corinthians, as well as being a Casuals's player. To obtain a visit from Oxford University was big! Also big business as the gate receipts from the 2300 crowd was £35!
The university was made up of players of the same calibre as Vassall, for instant the Welsh International player, the brilliantly named Morgan Maddox Morgan-Owen. A player who would be on show against The Casuals. Morgan-Owen was to also show incredible bravery in the WWI, eventually receiving injuries meaning he could never play again. 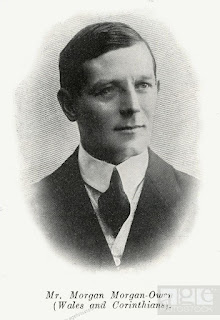 Immediately after the Casuals game the University side would be touring Austria, where they were described as 'the finest side in all of Great Britain'. For those older readers, who remember the newsreader Reginald Bosanquet on ITV, his Father, Bernard would also play in the match against the Casuals, although being more of a cricket man.
The grandstand that was built for the match was completed. It was actually opened a week before in a match against Wells. Paid for by public donations, the last £5 being paid out of the genourous pocket of William Maynard, former President of the club. The builders were Bird and Pippins of Yeovil who had built similar temporary ones in the town. In fact, the stand was supposed to have been removed at the end of the season. In 1905 another stand appeal was made, it would appear for an extension it was extended again in 1909 to cater for 600 spectators and was still in use by Yeovil Town Football club right upto 1963.
Here is a trivia question: Which Australian cricketer played in an Ashes series against England and played football for Yeovil in the same season?
You probably would be called out for a trick question, however in 1899, Australian cricketer Sammy Wood played against England in the Ashes test and also turned out for Yeovil Casuals against Oxford University. Sammy Wood, I should explain was also Somerset cricket captain and lived in Bridgwater. Also, one of the biggest characters to ever play the game!
As for the match itself, the Yeovil President Major James Kelly ceremoniesly kicked off, it was one of the only kicks anyone from Yeovil got! With the combination of Vassall, playing for the university against his friends, and Morgan-Owen, it was all too easy for the Varsity boys who ran out winners 5-0. However, for the match takings, the prestige and for the occasion it was truly a magnificent occasion for the club and for the town.
Unfortunately the Oxford University match was to be the highlight of the season. The hope that the victory over Street was gone with a 2-0 away defeat against Radstock that pushed the Casuals back into third place, Radstock jumping over them into second. Street going unbeaten after the Yeovil defeat, again claiming the Somerset Senior league title, but more importantly as the best side in Somerset.
As for the Dorset league challenge, well it was going the same way. A home defeat at home to Victor Ledger's Bournemouth Wanderers gave them the championship. All ending with a 5-2 home defeat to Weymouth in a match with nothing to play for.
Dorchester was visited by six of the players for the 'Frisby Cup'.. Six a side football also taking off in football circles. After beating The Royal Artillery, Dorchester Reserves, Bridport, Yeovil faced Dorchester in the final - they lost . The six players being, Hyde, Bond, Ewans, Beare, Wyatt and Lowe.
There was one other competition that the club entered into in 1898-99. That being the Somerset Challenge Cup, the story and controversial happenings surrounding it though, will take a whole post of its own. Next time!
Happy days
* for more seasons and stories check the archive
Labels: Oxford Universi