A revelation appeared at the AGM of 1901, the first team, even though a kit was issued had a tendency to wear their own home made shirts! Maybe to save the shilling that the committee had ordered the players to pay towards the cost the previous year. It had to stop they were told forcibly! Mr Newton the chairman of the meeting offered to pay half a Guinea for new shirts which was happily accepted. The shirts to be green body with white collars and white cuffs.

Mr. Arthur Newton
Despite the awful disappointing season, the club had managed to increase profit announcing that £54 now lay in the bank, news greeted with applause all around!
Through none fulfillment of fixtures and Casuals officials not attending meetings, the Dorset Football league had decided to not accept the clubs application for the season. Something the club saw as disgraceful. They would look further and despite being invited to play in the strong Bristol league, the club opted to apply for the Wiltshire version. Also playing in a comical Somerset Senior league with just four teams in it, Bridgwater, Street, Glastonbury and the Casuals.
Major James Kelly had decided to step down as President with the reason he now lived too far away in Langport. His request for resignation was declined!
An awful season-opening friendly match against Weymouth at Pen Mill, was witnessed by few. Just as well as the they saw the Casuals slump to a 6-1 defeat. Although it was around this time questions were beginning to be asked of Weymouth's behind the scenes financial activities.
Chippenham, the previous seasons runners-up was the venue for the Casuals opening league fixture, their first in the Wiltshire league. A good performance didn't reap the just rewards going down 3-1. Leonard Vassall, top goalscorer the season before, scoring for the Glovers. The opening line up being :
Palmer, Bond, Jourdain, Mytius, Vincent, Stone, Allen, Cook, L. Vassell, Clark, Gard
The continental sounding Mr. Jourdain became quite a mystery in Yeovil. He had moved to the town from London a year earlier. Quickly enrolling into all the sporting clubs in the town. It quickly transpired that he was sent from The Conservative Party to run the local candidates future election campaign. Once, being caught incognito spying at a Labour party meeting in the town! It was later discovered he wasn't from London at all but from the North of England. A couple of years later he upped and left the town in the middle of the night and was never heard of again!
Herbert Cook, playing upfront for Yeovil when his natural position was as a goalkeeper. Thst would soon change though. Herb Cook, who had started with the 'B' team, the third string of the Casuals, would go on for many seasons as the keeper, ending up with County appearances.
More disappointment came the Casuals way when Warminster deservedly beat them 2-0 at Pen Mill in front of a large crowd. The over-excitable Warminster press treating the victory by hyperbolically declaring "our boys beat one of the best amateur teams in the country on their own field"
Mid-October saw the club start their FA Cup campaign, or as it was labelled then, The English Cup. Trowbridge away had been drawn out of the hat at the FA offices in London. That wasn't to the Casuals liking though. A quick telegraph was despatched to the Flower show ground, Trowbridge FC's headquarters. Yeovil offering them £5 and the bait of higher gate revenue. It worked!
It worked out at a pound per goal for Yeovil as they sent the Wiltshire club back home on the back of a 5-0 defeat. Big Bob Wyatt, centre forward farmer from Maiden Newton helping himself to four goals, in his first appearance of the season. It was a new slimmed down version of Big Bob, he'd been on some fitness regime. He was now only seventeen stone!
The victory over Trowbridge gave Yeovil a first in their short history. Being drawn away to Southern League Swindon Town, it would be their first professional opposition in a competitive match.
The Casuals visited the County Ground, Swindon on November 2nd 1901. Accompanied by a few hundred fans, who took advantage of cheap rail tickets to the match. 2000 attended, the Swindon media arrogantly blaming the low gate on "the low quality of the opposition on show "
Swindon were good though, Yeovil never came close as Swindon romped easily home 4-0. The Swindon crowd, with more humility than the local media, applauded Herb Cook the Yeovil keeper off the field at the end. His heroics had kept the score down to single figures. 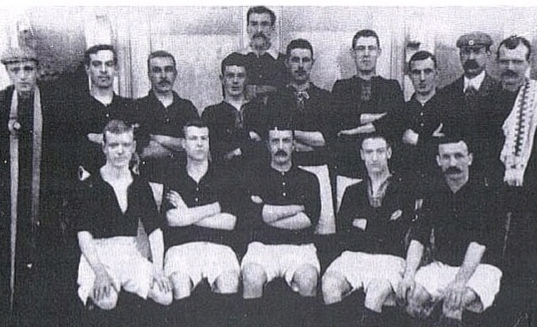 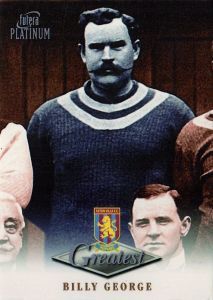 Of course, Villa filled with international and talent were too good and romped home six-nil. At the end the Somerset lads were said to be out on their feet and the Villians hardly sweating. The Somerset FA more than happy with the £50 taken at the gate. 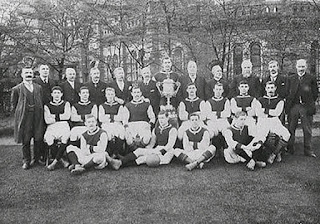 Aston Villa in 1902, the year they                                played at Pen Mill
Any chance of honours in the Wiltshire league were exintinquished by defeats against Bradford-on-Avon and Chippenham United. Though the Somerset League title was just one win away, as Bridgwater arrived at Pen Mill without a win all season.
As they had been beaten 10-0 at Pen Mill the previous season they were looking to do better this time. The fully accomplished their aim, they lost only 10-1 this time. Big Bob Wyatt helping himself to four, Beard a hat-trick, Leonard Vassall, Tommy Stone and White up from the Reserves scoring.
The large crowd gathered in front of the main stand to celebrate Captain Bond collect the Somerset Cup. Presented by the President of the club Major Kelly. Obviously with such a small league the Somerset FA not bothering sending officials. It was a hollow championship win with just four teams taking part. Silverware was silverware though and again pronounced Yeovil Casuals as the champions of the county. The team were pulled by horse and cart through the town, to only moderate crowds compared to other victorious years. With that the cup was placed in a High Street Jewellers for passers-by to admire. 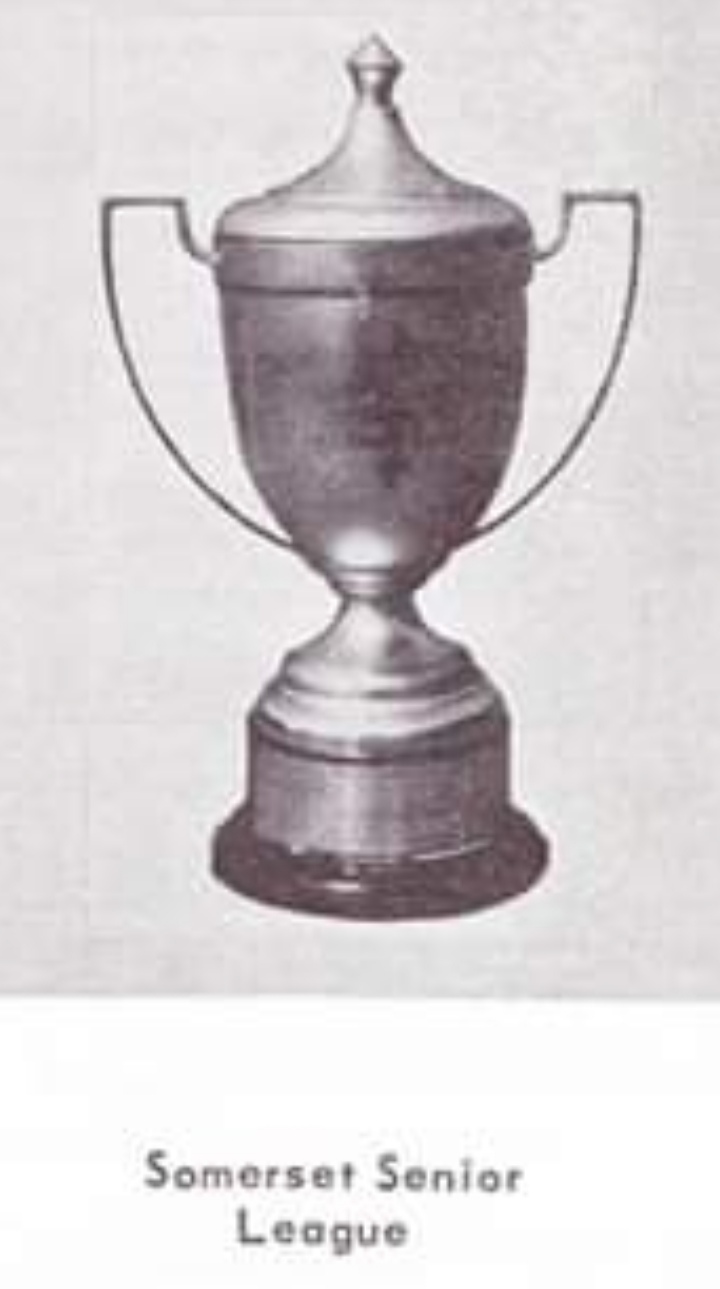 With the Somerset league safely in the jewellers window, Yeovil completed its Wiltshire league commitments. Impressively winning 4-0 and 3-0 against Calne and and then Melksham.
Just one game remained!
Devizes turned up at Pen Mill, still with a good chance of being crowned Wiltshire league champions. They needed a win at Yeovil to do it, and be champions on goal difference. Of course, the 15-0  won against the five man Glovers back in December being the difference! Yeovil wanted revenge and what better revenge than killing of Devizes championship hopes. Both sides putting out their strongest elevens.
A crowd of over 1500, watched an exciting, clean and well contested match. However, two goals in the second half by Gilbert Vassall and young White did it for the Glovers. Both goals being met with deafening applause. Revenge was definitely a dish best served cold, the title went to Warminster.
With that the season was over, a season that could be said was one of the most exciting at Pen Mill. Especially compared to the awful dullness and displays of the season before. The nets were taken down, the goal post were removed and the club ended the season with a touch of romance. They organised a midnight dance on the pitch lit by candles all around and music from the local Petters brass band. It poured down! Conjuring up images of penquin suited footballers and long gowned women, dancing the tango on the eighteen yard box in the torrential rain!
Happy days!