After the sad and untimely death of  Arthur Paul Read , Yeovil's first footballing hero, Yeovil fans didn't have long before another new hero captured their hearts. Namely, Gilbert Claude Vassall.
In fact, Vassall was one of five Vassall brothers that at one time or other played for Yeovil football club in either association or Rugby form. Even going back to the first ever recorded Yeovil match in 1881, Vassall was a popular name at the Yeovil football club, with Gilbert's older brothers, Harry and Henry both going onto play Rugby Union for England. His younger brothers Samuel and Leonard also appearing for the Casuals. Leonard in particular being a prolific scorer for the club in the late 1890s.
Gilbert was born on the 5th April 1876 in Hardington Mandeville. One of thirteen children to the Vicar of Hardington, William Vassall and his mother Ann who was originally from Leeds.
Being from a family of wealth and influence, a young Gilbert was sent to the prestigious Charterhouse school in Surrey as a boarder. It's without doubt it was whilst a pupil at, Charterhouse that Vassall first gained his love for Association football. The school being widely thought of as one of the birth places of Association football in England.
After completing his education at Charterhouse, Gilbert then enrolled into Oriel College, Oxford. It was here his sporting attributes became widely admired . It seemed that there was not a sporting challenge that he could not master. Graduating with a MA in Theology.
It was whilst at Oxford, Gilbert Vassall first made his debut for Yeovil association football club at West Hendford, on the 24th March 1895 aged just nineteen years old . In a home match against Wells City. A match that Wells had to win to be crowned Somerset league champions. Vassall's performance that day was simply breathtaking. Fast, skillful with a quick eye for a pass and an incredible shot. Scoring one and assisting in two goals in a 3-2 win for Yeovil. In later life, a friend of his remarked that he witnessed with his own eyes Vassall break a goalpost with a shot.
It seems that Vassall divided his time between Oxford and Yeovil, returning every weekend he could to play for the newly formed Casual's side. Testament to Fred Bond who enticed him to the club when any club in the country both Amatuer and Professional would have jumped at his services. Vassall though was a proud Somersetonian and considered it an honour to play for the Casuals.
Whilst also playing for Yeovil Casuals, Vassall was chosen to play for the Corinthians football club. One of the most famous clubs in the country. A club based on amateur values, refusing to play in leagues or enter into cup competitions. They were considered the best team in the country. And also one of the most influential sides in football history. A yearly event was the FA Cup winners versus The Corinthians football club match  It was rare that they lost. In fact Manchester United's record defeat is against The Corinthians.
When Bury won the FA Cup in 1903, beating Derby by a record score of 6-0 in the final, their next game was against the Corinthians. Vassall played as right-half and tore the FA Cup winners apart.  The Corinthians toured the World, showing their footballing ability. One of the most famous sides in Brazil, Corinthians Paulista are named in their honour. 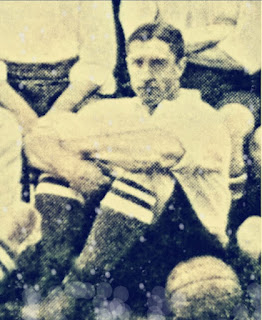 Vassall continued to play for Yeovil though even throughout his Corinthians career. At times being unplayable. He was no soft posh boy though. A fellow player of his in the Oxford Varsity side described his play as brutal in both skills and tackling. He was also direct in his opinions , being described in later life as :
"He (Vassall) understands how things should be done, and he will give his opinion with a directness which may be disconcerting, but which will certainly command respect. For his opinion will be based upon principles which do not admit of pettiness or brag or insincerity. He will help his team to take their rightful place again as leader in all that is best and most untainted by false ideals"
Vassall's footballing talents throughout the country did not go unnoticed. In 1899, whilst still a predominantly Yeovil player and occasional Corinthian, Vassall was selected for the full England team to play against Ireland. Vassall had a dilemma though, the same day he was down to captain Oxford in the Varsity match against Cambridge. He loyally chose his university. He was never selected again. Still, he is the only Yeovil player to be selected for England.
He was still turning out for the Glovers at Pen Mill at every chance he could, making his last appearance in 1905. Unfortunately, records were not kept of how many appearances or goals he scored for the Glovers, all one can say is that if the Glovers were away and it was announced Vassall was playing the gate money would increase considerably. So famous he became, that he even warranted his own cigarette card, the forerunner to today's Panini collections.
Vassall returned back to live in the area after his Oxford days were over, not before becoming the second best long jumper in the country after the famous C. B Fry. Once  jumping just two inches short of the World long jump record, held by Fry.
In January 1901, Vassall, who by now was living in Hurst Manor, Martock, married Mary Cotter at Holy Trinity Church in Yeovil. Turning out on the Saturday before for the Casuals against Glastonbury watched by his bride to be. The Casuals presenting him and his wife a silver rose bowl after the game. Vassall was asked to make a speech, in it he showed his love for the Yeovil Casuals.
"Gentlemen, it always gives me the greatest sporting pleasure to play for such a keen and sportsmanlike team as Yeovil Casuals. Even though I am told as a married man I ought to give up football you can be sure that the club committee will have to tell me I am not wanted before I stop playing for you"
* for more seasons and stories check the archive