Frederick J. Bond, was born in Ash near Yeovil in 1873, born to William Bond, originally from Axminster and Ann. Like his Father, William, Fred was a farmer. Farming the meadows known as Little Lyde Farm with his two brothers Henry and William junior , which was situated in what is now known as the Sunningdale area of town, just off Lyde Road.
He was educated at the prestigious Kingston School in Yeovil, where no doubt he gained his first taste of the Association game, under the guidance of John Aldridge, owner of the school. His Father, William was more of a rugby man and had played for the town side, yet in later life took up the Association game playing for Yeovil, even playing against his son, Fred in 1889.
Fred it would appear from an early age was a very talented footballer, playing against mens teams from the age of fourteen. His name popping up in match reports and teams all over town. One match report even has him turning out for Wincanton. Positioned as a half back, he was known as a hard working, tough tackler with a terrific and powerful shot. More to the point at that time he was a gentleman on the pitch and off it.
At just eighteen he was the captain of the Yeovil team, showing maturity way beyond his years, staying Captain until 1904 ,and only then stepping down to give himself more time with the running of the club. His association with the club lasted way into the 1920's. Even then attending matches as often as possible even pictured before the famous  Sunderland FA Cup match in 1949. 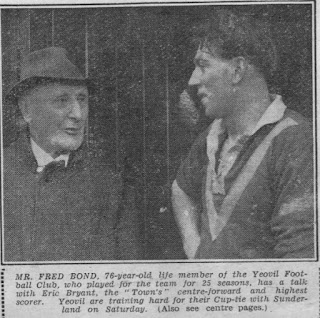 Once playing against Radstock, he protected an opposing player from a beating by a 'screaming mob' after being sent off. Famously he once took his team to Devizes in 1901, only for half the team to catch the wrong connection at Trowbridge. Captain Fred, arrived at Devizes's Quakers Walk ground with just five players. He happily accepted when Devizes refused to cancel the game. With just Fred and four other Yeovil players they took the field to take on the eleven of Devizes. They lost 15-0! Fred it was reported tried from the first to the last in a hopeless cause! For the record, the Devizes defenders wore coats to keep warm.
Not afraid to speak his mind, always with a sense of what was right and wrong, Fred would in 1895, lay the path to what we know  and love today as Yeovil Town Football club.
His single mindness and ambition for a Yeovil club free of the ties of rugby opened Association football in the town. It's no exaggeration to say without him we wouldn't be supporting the team today or if we were it would be a very different beast. His organisational skills after he founded Yeovil Casuals enabled the club to run a profit for consecutive years at the start. Giving it the spring board to go forward. When many teams of that time faded away, Yeovil grew, taking it to the Premier football club in Somerset, where it still proudly sits.  That growth was down to not just one man however the biggest contribution is on the part of  Frederick Bond.
Fred died in his beloved Yeovil in 1958 aged 86 years old. One would imagine if you hunted the corridors of Yeovil Town Football club today, no trace of him could be found. I, for one find that such a sad shame to a man who in my book is the Father of Yeovil Town Football club.
May he rest in peace.
* for more seasons and stories check the archive