Interest in Association football in the town of Yeovil, exploded in 1892, with teams starting up all over. Factory teams, pub teams, church teams, village teams. In fact, anywhere eleven men gathered it would seem a football team would materialise .

An extra indication of this football explosion being in the reporting of Petty Court sessions in front of Mayor, Dr Colmer, Yeovil Football club's, former President and now the town magistrate. In May, six boys were caught playing football in Queen Street. Witnessed by PC Hurler, who commented that :

The usually strong minded Dr. Colmer, had sympathy on them and remarked on the lack of park area in the vicinity for the boys to play in. Then removed his football sympathising hat and did his civil duty and find them all two shillings with cost.

One group of interested folk that without doubt saw this rise in Association football with raised eyebrows were the members of the Rugby side of the football club. Which for many years has been the principle sport in the town - things were changing.

Also in May, the club obviously wanting to be transparent, published its annual accounts in the Western Gazette. Something that would seem incredible if it happened today.

The accounts displayed a large rise in travelling expenses with the Association team in the previous financial year performing in the Somerset Senior league and also introducing a reserve side, although that side only playing locally. The cost of hiring the pitch had doubled to £10, and Bird and Pippard, local builders had been paid £3.8 shillings for fencing.

For the 1892-93 season, the most surprising decision was made to change the colours of the club to maroon shirts and white knickers. Again, the Somerset league was entered, although greatly reduced in the amount of teams for 1892-93. The usual sprinkling of friendly matches were arranged with the intenion to keep revenue going. 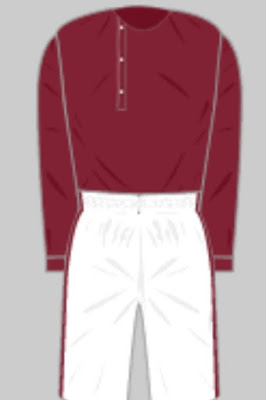 Stoke-Sub-Hamden were the visitors for the first game of the season, described as a practice match not a friendly. Stoke a few years later, would rise quite high in Somerset football and crowds of over a 1000 were not uncommon with Somerset cup matches against Yeovil Casuals in the village.

A pitch change had also taken place, the third in three years, with the previously affable Mr Leech refusing usage of his field. The club reverted back to Mr Tring's field, the previous misdemeanors of the club's misuse of it obviously forgiven.

Stoke, in a one sided match, were despatched, 8-0  in front of a good number of spectators on a hot day in West Hendford.

The side for the opening game being :

The good Reverend Hotham, had voiced his intention to retire the previous season wishing to spend more time with his flock,. However, he turned up for the Stoke match in new boots and had been persuaded to turn out for another year by his valued team mates. V. Thring is believed to be Vaultier Thring, the nineteen year son of Mr William Thring, owner of the pitch who the previous season had played for Weymouth . Mr. Rose in defence had been gangpressed into being Club secretary in August, replacing the much loved Mr. Walter Walker.

After a cold October full of friendly matches, the season proper didn't start until the 5th November, very apt as it turned out when Paulton Rovers visited, and fireworks did fly!

A large excited and noisy crowd had descended on West Hendford to witness the first 'proper' game of the season. Paulton had a reputation of being a strong, argumentative and rough tackling side. They didn't dissapoint.

In a rough, hard tackling first forty minutes, Yeovil had somehow managed to lead three-nil. Just before the half-time break to 'suck lemons' , Hickley, making his Yeovil full debut shot from distance  and scored a fourth. The  Paulton players complained vigorously that someone was in an offside position. The referee, who just happened to be William Bond, Yeovil ex-player and Father of Fred in the Yeovil backline, turned down their protest. Uproar ensued, and three of the outraged Paulton players walked off the pitch refusing to continue, arguing that the biased  Mr.Bond should not be referring a match involving a team he was so closely connected with. They had a point!

The goal was chalked off after a discussion between the captains and the players returned and play resumed to the final whistle, Yeovil winning 3-1. Paulton handed in their protest to the Somerset FA immediately.

A week later, a local reporter at the game expressed that he wished Yeovil fans showed more 'impartiality' for they shouted throughout.

After the match, it was reported, that a group of Paulton players and officials stopped off in one of the many local hostelries before catching the late train home to  North Somerset  Surprisingly, especially after the frosty reception after the match, they discovered a warm welcome from the landlady who pointed them to food, a meat tea, that had been laid on after their hard endeavours in Yeovil, explaining the Vicar of St John's (a Yeovil football club member) had kindly paid for the feast. They happily accepted with gratitude and tucked in heartedly. With full stomachs they left the pub, with a wave and thanks . The landlady waved them off in return, only for ten minutes later a group of touring camponologist, bell ringers to me and you, arrived looking for their meat tea after being sent to the hostelry by the Vicar!

Games passed in a freezing December, a credible 1-1 draw against the old enemy Wells being treated with joy. Wells being Wells, complained that the Yeovil team arrived late and the match didn't reach the full alloted timescale because of the light. Glastonbury, another strong team, gained a 2-1 victory with a late penalty with Yeovil struggling to field a full side.

The Somerset FA, met at Evercreech and decided that Paulton's complaint should be upheld and the controversial match earlier in the season should be replayed. On Boxing day 1892, they returned to a cold and wet Hendford, This time met with a larger crowd than before and dare so more hostile. The match passed peacefully though with a fast and strong Yeovil winning 4-1. No report was given if the Vicar of St John's supplied a meat tea after!

Undefeated Weymouth arrived in Yeovil for a return match, in front of a large  crowd that "lined the ropes and shouted with great excitement for the Yeovil boys" . It was to no avail though, as Weymouth, knocked four past Palmer in the Yeovil goal with only young Mitchell's goal in reply. Someone making his debut for Yeovil that day was Walter Seymour from Sherborne a player who al years later would be sub-captain of  a very successful Yeovil Casual side and a fans favourite, along with his brother Herb Seymour, who would be captain.


Respectively Yeovil finished their season with two wins, firstly over a weak Glastonbury side 4-0 and two weeks later again at home against Wells 1-0, a result that was greated with happiness throughout the town, especially after the antics of the Wells team the year before. With that the season was over with except a match against Kingston School (Past and Present) which raised little interest from players, supporters and press alike. For the record Yeovil won 1-0.

The season wasn't quite over though for Sammy Sugg the player who started of previously as a goalkeeper and this season had played most of his games in defence, being replaced by Palmer between the sticks. Sammy was given his county cap in a match against Dorset at Dorchester - in goal! He kept a clean sheet in a 0-0 draw.

Third place in the Somerset Senior league was a handsome finish, especially after the disaster of the year before. In total the Association team had played twenty-three matches, thirteen ending in victory, six losses and four drawn. Forty-eight goals being recorded with thirty-one against. The Western Chronicle kindly printed out a list of matches and results for the 1892-93 season.

The Annual Football club dinner, failed to get a mention in the press for 1893, although come the AGM later that year , plots were already being made for a split between the Rugby and Association sides of club., more of that next time

* for more seasons and stories check the archive