After the Crewkerne Grammer school match, it wasn't long before the Association team of Yeovil football club were back in action, this time against Mr Aldridge's Kingston School. It should be remembered that it was Mr. John Aldridge, founder of Kingston School in Yeovil who was one of the first advocates of the Association game way back in 1863. One could say he was the Father of football in Yeovil.

On Saturday 17th November 1888, Mr Aldridge sent his boys across town to West Hendford to take on the Yeovil team.

The West Hendford pitch* also known later  as  Cricket Lane, was little more than a field with some rope around it, a grand pavilion, paid for by public donations in the 1860s that was apparently  'admired with envy by opposing teams' stood on the side. It was recorded later in a rugby match against Wells that one of the Wells players, so taken with the pavilion, sketched it so as to build one for their club.

Pavilion aside, it lacked very little comforts, spectators stood on grass around the edges, apart from when the County team played then planks of wood would be called for from timber merchants to lay by the ropes for all to stand on.

The main problem though was the entrance to the pitch, a hole in the fence with a man with a table collecting 3d admission, which was nothing short of a bog.  Entry being almost impossible for spectators on occasion, especially after rain which turned it into a quagmire, which was the excuse when attendance figures dropped for the rugby games a couple of years later.

Unfazed by the likelihood of wet or cold feet,  'a fair number of spectators' turned up to see the reserected Yeovil association team in action against the boys from Kingston.

The match stated with William Sprinks in goal however by the second half he had swapped with Thorne. Something he was accustomed to doing in matches.

William Bond playing up front for Yeovil may have gone into tackles with the Kingston fullback without his usual full force, his opposite number was Fred Bond, his own son!

A good game was had by all, finishing in a three-all draw as spectators squelched back to their homes in their muddied shoes. In the Bond household one can be sure over dinner the performances of Father and son were debated long into the evening.

Fred Bond, then aged just sixteen years old, must have impressed in the Kingston match as a week later, he was in the Yeovil side at home to Sherborne, along with his Father, William. A match that ended two-all. Personally, I can't t recall any other time a Father and son combo have played for Yeovil.

In the next couple of months Yeovil played regularly, not all matches being reported on unfortunately.  A return match was played against Crewkerne Grammer School on the school grounds , a match that saw Yeovil return on the back of a 4-1 defeat

Christmas came and went and matches played unfortunately unrecorded until February 1889 when Kingston school were visited to play the past and present students. A game of two halves, 0-0 at half time ending in a 5-0 victory for Yeovil, helped by a hat-trick by Mr. W. Walker.

Away from the mud and sweat, the club held a smoking concert at the Town Hall in March 1889. A smoking concert can be best described as a Victorian karaoke, with players and their wives taking turns to sing songs and read poetry recitals. As the other players smoked cigars, drank port and sang along, the evening  finishing with all upstanding as they sang God Save the Queen.

Bridgewater paid a visit to West Hendford in April and went back empty handed after Yeovil again won 5-0, a team that in the coming years were to become a nemeses of the Yeovil club.

The last game of the campaign was against Somerset Rovers, a team containing Denning the County association County, even though Rovers had played often in the days before, they proved too strong, winning 4-0. Interestingly playing for Yeovil that day were the Ducat brothers who usually played for Crewkerne grammer school. Richard Ducat aged just eighteen at the time of this match, was another who sadly lost his life during war time. He's buried at the Bashra War cemetery in Iraq and his name engraved on the War memorial in Crewkerne.

By the end of the 1888-89 campaign the club reported that the association team  had :

'a very satisfactory term, Although no phenomenal success has been achieved, yet
when it is remembered that many of the members were only novices in the game, the Club may be said to have a made a very praiseworthy record"

However, the real success that teams were judged on  at this time, came in the financial one not the playing. All would be revealed at the AGM in September 1889 if financially it had been one to pat each other on the back. 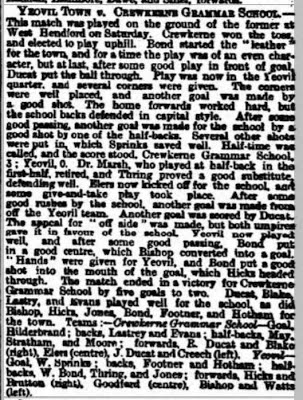 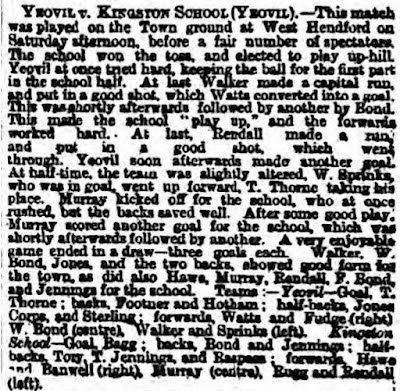 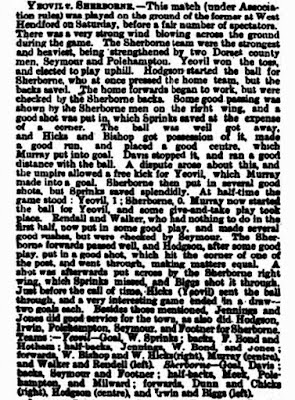 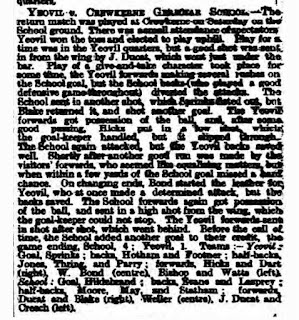 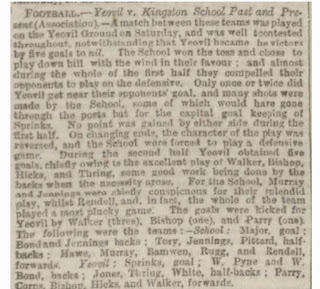 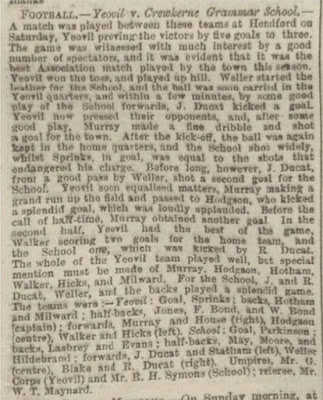 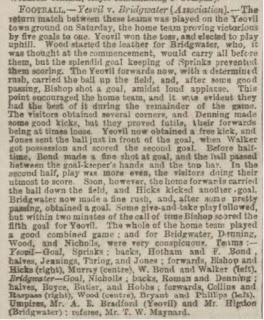 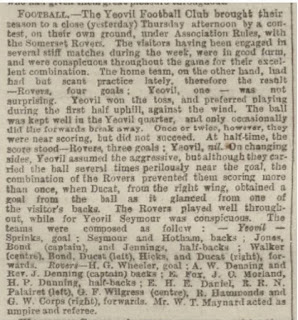 *In 2020, Yeovil fan, Tim Lancaster investigated the exact location of the West Hendford pitch, now built over by the extension to Westlands. He pinpointed it as to here : 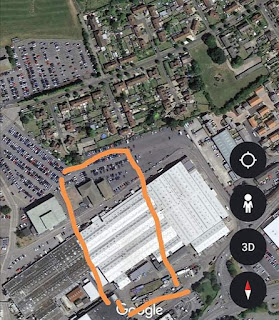