It's hard to say when the first football match was played in Yeovil, football similar to as we know it had evolved from Rugby as early as 1850. The oldest independent football club in England was formed in 1857, Sheffield FC. However by as early as 1863, football was being played in Yeovil. The first recorded 'association' match in the town was on the 19th December of thst year , when,  what can only be best described as a comedy match took place. Played between nine Gentleman of the town and twenty-two boys from Mr Aldridge's Kingston School. 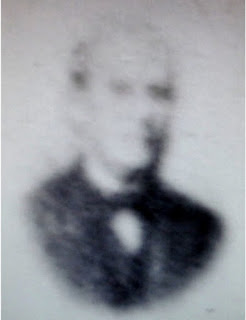 Now, Mr Aldridge, a very distorted photo above, can probably lay claim to be one of the first promoters of association football in the town. In the coming years, his name would be linked to various Yeovil Town teams. His school preferred to play the association game in comparison to Rugby, which was prevenlent throughout the land since the 1820s when William Webb Ellis picked up a ball and ran with it, although that folklore is disputed.

The match reported on in 1863, was played on a field on Mudford Road, and was attended by many. Interestingly, it reports of one of the Gentleman, Mr Newman, catching the ball and and scoring a goal with a fine kick. At a time, when asociation was evolving from rugby,  under 'Sheffield' rules, a player of catching the ball could place it down for a free kick. For the record the Gentleman won 2-1 and a Brass band played Handles  'See the conquering heroes, come'. A song which was to become well known to Glovers fans in the coming years as it welcomed home another cup winning team at the station at Pen Mill. 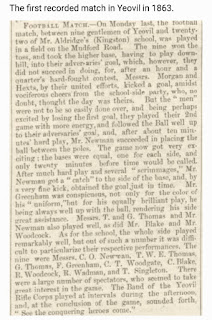 And so the seed was laid for football in the town, a town used to rugby and cricket.